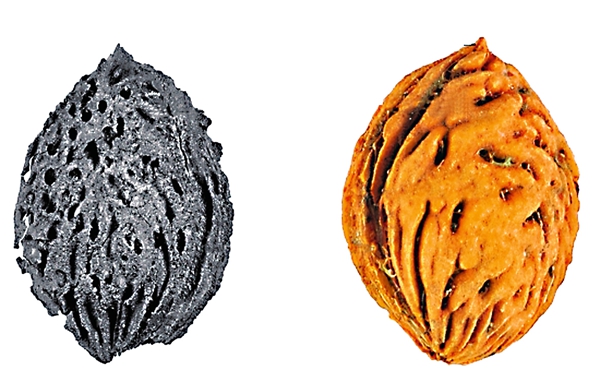 The paleoecology researchers of Xishuangbanna Tropical Botanical Garden, Chinese Academy of Sciences recently published a paper in the British journal Scientific Reports with the title “Peaches preceded humans: Fossil evidence from SW China,” declaring that the world’s oldest peach pit fossils discovered in southwest China advanced the evolution of peaches to 2.6 million years ago. The discovery also provided new evidence for the belief that peaches originated in China.

According to Su Tao, an associate research fellow of the Paleoecology Group of Xishuangbanna Tropical Botanical Garden, eight well-preserved peach kernel fossils were found in August 2010 at a highway construction site near the Northern Kunming Bus Terminal. “Based on scientific determination, the peach fossils date back to about 2.6 million years ago, and the discovery remarkably advanced the evolutionary history of peaches,” said Su Tao. He told reporters that the oldest peach pit fossils found previously were no more than 10,000 years old.

“These fossils have provided the latest evidence for the belief that peaches originated in China.” Su Tao said that their morphological characteristics are very similar to those of modern peaches, but due to lack of understanding of the entire plant morphology, the paleoecology group has temporarily defined the fossilized species as Kunming peaches.
The paper was jointly written by the research fellow Zhou Zhekun and the associate research fellow Su Tao of the Paleoecology Group of Xishuangbanna Tropical Botanical Garden of CAS, the Pennsylvania State University, Kunming Institute of Botany of CAS and Kunming University of Science and Technology.( Yao Bing)