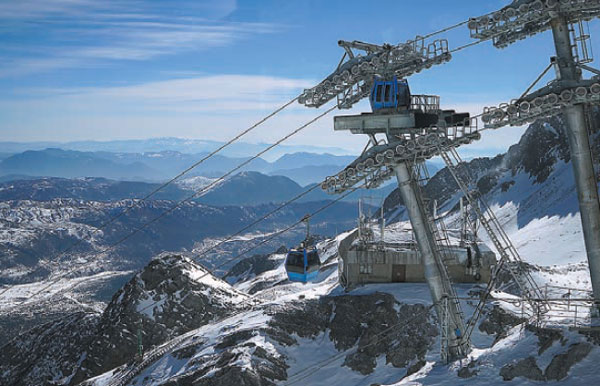 After a quick meal of yak meat hotpot at one of the restaurants back down in the park, we walked to the nearby Ganhaizi Lanyuegu Theater for the next grand spectacle - Impression Lijiang.

The second of a series of outdoor shows co-directed by the film director Zhang Yimou, with Wang Chaoge and Fan Yue, Impression Lijiang was first performed in 2006 after two years of preparation. A cast of 500 local farmers, from 10 ethnic groups from 16 nearby villages, present the beauty of their ethnic cultures during the 60-minute show in the open coliseum style theater, 3,100 meters above sea level.

The show is divided into six parts: the local people's lives along the ancient tea road, the bold and unrestrained ethnic drinking customs, a beautiful but heartrending Naxi love story, the Datiao dance, and the drum dance for worship and sincere prayers for blessings for all.

The most impressive and moving part for me, was the telling of the legend of Yulong Third Country. The Naxi people traditionally believed that if a young couple committed suicide for love at the Spruce Meadow on the Yulong Snow Mountain, their spirits would enter the third country of Yulong and receive eternal happiness.

At first I did not realize it was tragically beautiful, but the narration of the legend left many in the audience sobbing, as the couple eventually disappear between earth and sky.

The praying for all, in which the performers and audience all stand up and raise their hands to their foreheads, brings the show to an end.

"This is a place of magic. Heaven answers when you call, and the Earth answers when you call ... Make a wish and we sincerely pray in front of the majestic Yulong Snow Mountain for you who come from afar. We pray your wishes will come true and we pray for the blessings for you."

I found the ritual deeply moving, my heart was touched and I too found tears in my eyes.