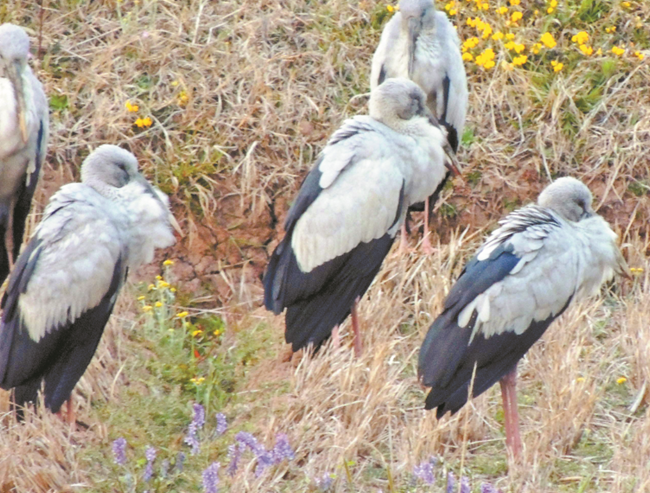 Recently, a flock of about 50 birds were spotted in Shuangbai County in Chuxiong Yi Autonomous Prefecture. Based on the large number of pictures taken on site, ornithologists at the Yunnan Wild Animals Park identified the birds as oriental white storks, which are a first class nationally protected animal in China. It is very rare for them to appear in a flock in Yunnan.

In the pictures, the birds’ feathers are grayish white instead of pure white because they are still young.The birds can feed themselves, but are only about one year of age and not yet fully mature. According to Qin Lihong, an ornithologist working at the Yunnan Wild Animals Park, these chicks are similar to adult birds, but their feathers are lighter in colour and have a weaker metallic lustre. As they grow older, their beaks and legs will gradually turn red, and their feathers will turn from grayish white to pure white.

These oriental white storks probably have migrated from the north to winter in Yunnan.As temperatures rise, they will fly to the north to breed. In late September or early October, they begin to leave the breeding grounds and migrate southward in flocks.