Home in the last three years

What could happen in the span of three years? Stories from ordinary people’s lives show the changes have taken place in the last three years, as people adjust their expectations and set out on new paths.

From adopter to adapter

Lyv Yiming is one of Beijing’s millions of dreamers. He shares a three-bedroom apartment near downtown. Lyv exists as the glue connecting his two roommates, Liu Wentian, Lyv’s childhood friend and Sun Chen, his college friend, forming the foundations of a "family."

Many young people experience frustration as they chase their dreams. And that has been Lyv's fate ever since he came to Beijing in 2012 to follow his musical dreams, starting out in a poorly equipped jazz band with two other members.

"We had to practice under a bridge, because we couldn't afford to rent a professional place, but the sound effect turned out to be surprisingly good, because of the echo," Lyv joked.

The decline in the popularity of jazz shattered their aspirations, and all the band members ended up changing their life plans.

Worse was to come for Lyv after the end of the band: He took a job as a bar tender, only to find that it was trap to coerce him to be male prostitute. It was the lowest point of his life. 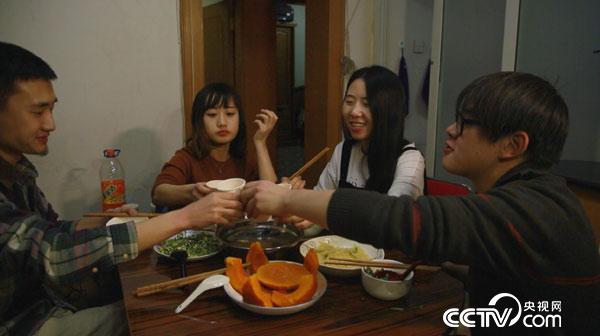 Young people drifting in Beijing have dinner together as a "family".

Lyv spent the following years as a professional saxophonist for different singers and performers. But recently, as he became increasingly bored with his work, he decided to make a change.

"Like in every industry, the reality is totally different from what you thought. It is not that I don’t want to go down the road; I think it will be a better idea to stop for a while and return as an identified singer one day, as many of friends are also doing so," Lyv said.

Liu Wentian sympathizes with Lyv's experience. Liu was determined to be a cartoonist, but he became a project operator in the cartoon industry.

"Once you further enter into a certain industry, it requires balance among many different skills to be successful rather than simply sticking to one thing regardless of other qualities," Liu said.

"I guess I never understood, until I became a project operator, how there are clashes between a cartoonist who usually is too dignified to allow any changes of their work from customers and the client who seems never to be satisfied."

Compared to Lyv and Liu, Sun Chen’s upheaval has just begun. He gave up a comfortable living situation after working in media industry for two years in his hometown to pursue his dream of becoming a programmer. He is barely able to make ends meet or even get close to being hired as a programmer, because of his lack of knowledge and solid experience in this field. Majored in dancing back in university, his desire to be a programmer is pushing him toward a life-changing challenge.

"The whole family persuaded me to return home when I was frustrated about trying to find a job, but I still don't want to simply give it up," Sun said.

Living independently means the three roommates have to manage everything on their own, including cooking. Lyv is passionate about cooking, and prepares most of the meals using techniques learned from his father. He invites friends round to cook and eat together. During these dinners, they release stress, tells stories, talk about homesickness, and Lyv plays guitar.

The three housemates each want to buy a house and settle in Beijing, but perhaps that goal will only be reached each stumbling step at a time.

From one child to two

Three years ago, when Liu Fei and Chen Yanan just figured out their days of life with their first child turning five, the second was born.

“It was kind of a planned surprise,” said Chen. “Since I am the only child of my family, the sense of loneliness has accompanied me ever since I was a child. Plus, seeing the close relationship between my husband and his brother makes me feel envy, so having a younger brother or sister for my son couldn’t be a better way to deter loneliness.”

But the couple knew that an added member would bring another reshuffle to their family, only this time bigger. To welcome the newborn, the family moved to a larger house. The mother quit her job again, and the father had to work harder to guarantee the quality life of the whole family; their son was also well prepared mentally for the upcoming younger brother. Stress and self-sacrifice increased, but they all feel it is well worthwhile.

Liu works in top management at a real estate company in Beijing. His job requires frequent business trips that add extra pressure to his fatigue and his isolation from his family.

"My husband used to come home early every day before the birth of our second son, then he failed to be accompany of most of our oldest son's activities at school, such as calligraphy competitions, football matches, and so on. I just thought it might be better if my husband is able to be present more often," Chen said tearfully.