Potatoes, China's food of the future

When people think of Chinese food, rice is often the first thing that springs to mind. That's despite the fact that there is a geographical dividing line between the wetter southern regions, where rice is the staple food, and the north, where grain is dominant. Corn, the third staple, straddles the line because it can be grown in any part of the country.

Confronting the world's largest population and requiring a huge range of imported foods, the Ministry of Agriculture has begun promoting the food of the future - the potato, a tuber that has long been part of China's culinary landscape.

As a result, the culinary dividing line may soon be rendered moot, because potatoes, which can be grown in most areas, are set to become China's fourth staple foodstuff. 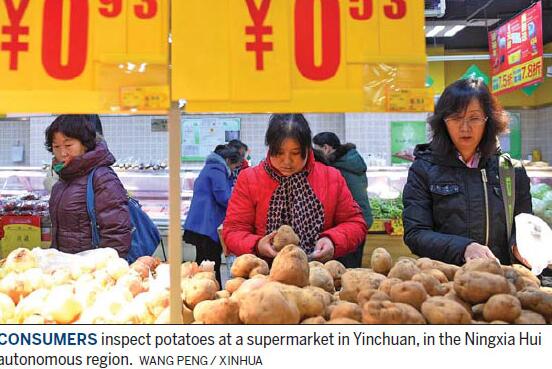 As part of the ministry's five-year plan (2016-20), which was published in February last year, potato cultivation will be expanded to 6.67 million hectares by 2020. In 2014, the figure was 5.64 million hectares, according to the Food and Agriculture Organization of the United Nations.

In the future, potatoes will account for 30 percent of the nation's food, with large areas of wheat, rice and corn being turned over to cultivation of the new fourth staple, the ministry says.

The plan has already had early successes. Potato powder now accounts for at least 50 percent of all components of food made from staple crops, such as noodles and steamed buns, a rise of 30 percent from just four years ago, according to the ministry.

Now, a research team at Zhejiang A&F University in Hangzhou, the provincial capital, is researching methods of producing artificial rice, made from broken rice grains, bulked out with potato powder and scented with essence of gardenia. The estimated price will be about 7 yuan ($1; 1 euro; 0.83) per kilogram.

China's grain output rose from 411 million metric tons in 2004 to 565 million in 2014, according to the National Bureau of Statistics. However, the growth in output hasn't caught up with the accelerating rate of consumption. The World Bank predicts that China's demand for grain will reach 670 million tons in 2020 rise to 700 million tons in 2030.

Moreover, with corn, rice and wheat yields limited as a result of limits on cultivated land and water supplies in recent years, the easy-to-grow potato has become the best backup to maintain food supplies and ensure national food security.

"Potatoes use just 30 percent of the water required to grow wheat or rice and they have the ability to adapt to dry, cold and barren areas," says Sun Zhonghua, the ministry's chief agronomist.

In addition to their ease of cultivation, potatoes also have high nutritional value because they are high in fiber and low in fats. They also contain more than 10 amino acids and a range of microelements essential to human health.

In the southwestern province of Yunnan, one of China's biggest potato-cultivation areas, more than 90 percent of the land is in mountainous or semi-mountainous areas, making it hard to farm. The ease with which potatoes can be grown has made them a popular food and a major source of income for local farmers.

Statistics from the provincial agriculture department show that Yunnan's annual potato output remained stable during the past decade at about 10 million tons, placing the province among China's top five producers. Since the 1950s, Yunnan's farmers have developed about 70 new potato strains, accounting for 20 percent of new varieties developed nationwide.

Potatoes that are grown commercially are actually clones, grown from tuber cuttings rather than seeds. As the tuber matures, it produces two to 10 buds, known as "eyes", arranged in a spiral pattern around its surface. The buds generate shoots that grow into new plants under favorable conditions. Approximately 300 to 400 tubers, each about the size of a chicken egg, can be grown on 0.06 hectares of land, according to farmer Li Shuyu, who has grown and sold potatoes in Yunnan for more than 20 years.

"Unlike most vegetables that grow from seeds, we need to store the 'mother potato' for next year's planting season. The storage temperature should be strictly controlled at 15 C or lower because if the atmosphere is too damp or the storage temperature is too high, the 'mother's' ability to grow into plants will be killed off," the 50-year-old says.

Constantly cultivating certain strains of "mother potato" on the same patch of land leads to another problem: The potatoes diminish in size every year and the yield per plant falls from about 12 to less than five.

The shelves of a lab at the Root and Tuber Crop Research Institute at Yunnan Normal University hold nearly 3,000 glass containers in which tender little buds are growing vigorously. The lab is expected to become the birthplace of solutions to the most pressing problems faced by farmers like Li.

In September, the university founded the Joint Academy of Potato Science, the country's first scientific center dedicated to potato research.

"We are mainly working on potato genomics and using the magic of science to transform traditional planting methods by growing potatoes from seeds instead of using tubers in the traditional way," says Li Canhui, the institute's director.

There is no easy fix, however, and many problems remain, he says, noting that many potato plants are sterile, so they are unable to produce viable pollen that can fertilize potato flowers and spread their genes.

Moreover, the genomic construction of most commercial potato cultivars - plant varieties produced via selective breeding - results in a breeding cycle of 11 to 13 years for new cultivars. The success rate is just one in 100,000, and repeatedly growing the same cultivar on the same spot for a long time results in lower output and smaller tubers.

The birth of a true "mother seed" would revolutionize plant breeding, according to the experts.

"Traditional planting methods require at least 200 kg of tubers to produce 1 ton of potatoes, but we can grow the same amount with just a handful of seeds," says Li Canhui, adding that he expects the research to yield successful results very soon.

In addition to seeds, the lab is also conducting research into new cultivars that have stronger resistance to disease. Asexual reproduction of potatoes ensures the continuation of desired crop characteristics, but because plants grown this way are virtually identical, they are particularly vulnerable to diseases.

Li Canhui, who has conducted research into potatoes since the 1980s, says the university has been studying the properties of potatoes for 40 years.

The research has also produced virus-resistant potatoes whose yield is 30 to 50 percent higher than ordinary cultivars, as well as several cultivars that have strong resistance to certain disease.

Moreover, a new cultivar named Cooperation-88, developed by the university and the Joint Potato Academy, is now the most widely grown variety in Southwest China. Its excellent taste and high yields have seen it cultivated in neighboring countries, including Vietnam and Laos.