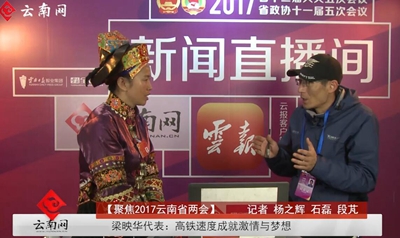 Reporter(Man): Could you please briefly tell us (Wenshan’s) social changes brought about by the newly opened high-speed railways？

Deputy(Woman): Yes, the opening of high-speed railways cheered up people in Wenshan, and they are very excited because this also means the coming of the high-speed rail economy. The high-speed trains will be greatly helpful in Wenshan’s socio-economic development and provide much convenience for people, especially for local migrant workers in coastal areas. Now, they don’t have to wait in line for long at railway stations, and they can buy ticket and go home quickly.

Reporter: Right, right. Now, gone is the days when buying a train ticket troubled us a lot. So could you share us your personal traveling plan recently?

Deputy: Ok, now many Wenshan locals want to travel by the high-speed trains. As for me, I want take the high-speed train to Shanghai for sightseeing with my family, including my mother in her eighties, when Wenshan Prefecture marks its founding anniversary in April.

Reporter: That’s great. So, having listened to the government work report, have you got any ideas on poverty reduction in Wenshan, especially measures for your county of Yanshan, which is expected to get rid of poverty in 2018?

Deputy: Well, Yanshan County will mainly do two things: First, pool the fund and investment. By fundraising via varied channels, we will solve the problem of fund shortage. Second, industrial development. We carefully studied the climate and earth conditions in Yanshan and we will also seek intellectual support from universities and research institutes. We hope to figure out the industries fit for Yanshan through joint efforts. In addition, we have invited in some good entrepreneurs who can lead locals in industrial development.