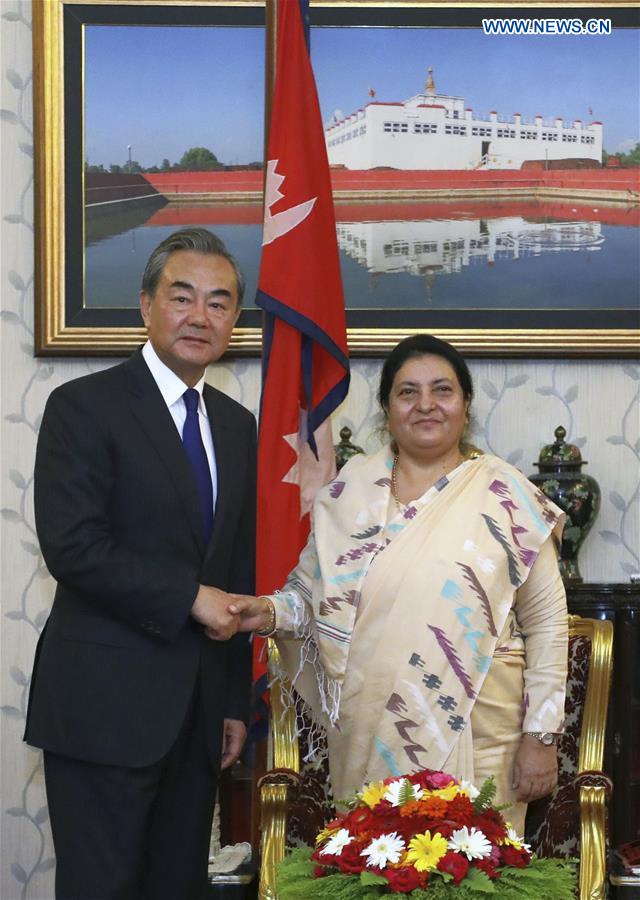 Nepal firmly adheres to the one-China policy, Bhandari said at the meeting, stressing that Nepal will never allow any forces to make use of its soil for anti-China activities.

Hailing China's remarkable progress achieved since the founding of the People's Republic of China (PRC) 70 years ago, Bhandari voiced her confidence in China achieving its "two centenary goals" and the Chinese Dream of national rejuvenation.

Pointing out that Nepal is willing to learn from the experience of China's successful development, Bhandari said Nepal has been actively participating in the China-proposed Belt and Road Initiative and stands ready to work with China to speed up the construction of the trans-Himalaya multi-dimensional connectivity.

The Silk Road Economic Belt and the 21st Century Maritime Silk Road Initiative (the Belt and Road Initiative), proposed by China in 2013, is aimed at building a trade, investment and infrastructure network connecting Asia with other parts of the world along the ancient Silk Road trade routes.

Nepal attaches great importance to China's international status, appreciates China's stance and proposition on climate change, the Nepali president said, adding that Nepal will continue to carry out mutual support and coordination with China on international and regional affairs.

During Bhandari's successful visit to China in April this year, the leaders of the two countries reached important consensus on building on the China-Nepal traditional friendship, developing the Belt and Road Initiative, advancing the trans-Himalaya multi-dimensional connectivity and boosting the people-to-people and cultural exchanges, Wang said.

He called on the two sides to well implement the consensus and work for the continuous advancement of the China-Nepal comprehensive cooperative partnership with ever-lasting friendship under the new historical circumstances.