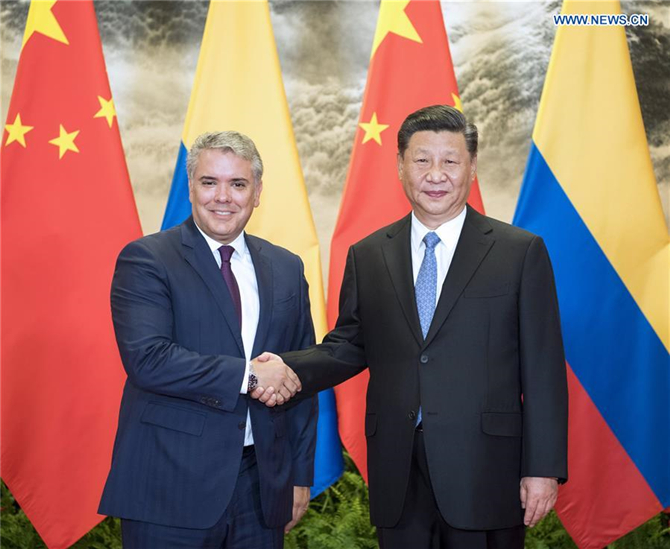 The year 2020 marks the 40th anniversary of the establishment of diplomatic ties between China and the Latin American country.

During their talks at the Great Hall of the People in Beijing, Xi said Duque's father, as a member of the then Colombian government, firmly supported the decision to forge diplomatic ties 40 years ago and witnessed the birth of the bilateral relationship.

"The relay baton of China-Colombia bilateral ties is passed to us now," Xi told the Colombian president.

"I highly appreciate your visit to China, which shows that you are committed to enhancing the traditional friendship and mutually beneficial cooperation between China and Colombia," said Xi.

China will continue to support Colombia in promoting the peace process and post-conflict reconstruction, said Xi.

He also encouraged both countries to further explore potential for pragmatic cooperation, consolidate cooperation in traditional areas and expand to new areas.

China welcomes Colombia to take part in the Belt and Road construction so as to realize the alignment of development strategies of both sides, Xi said, calling on the two to enhance people-to-people exchanges, jointly safeguard the existing international system with the United Nations at its core, promote the reform of global governance mechanisms and make more efforts to help the economic globalization process become more open, inclusive and balanced, and develop towards win-win results.

Xi called Latin American and Carribean countries "a force to be reckoned with in the international arena" as they boast huge potential and broad prospects.

He said China has always respected the rights of Latin American people to choose a development path of their own, supported Latin America in speeding up its integration process and backed the proper handling of the Venezuela issue via dialogue and consultation.

China stands ready to continue to play a role in encouraging dialogue and talks and would like to maintain contacts with Colombia, Xi said.

He added that China is willing to strengthen the building of the Forum of China and Community of Latin American and Carribean States.

Duque offered his congratulations for the 70th anniversary of the founding of the People's Republic of China.

He said he admired Xi's outstanding leadership and prominent international influence and would like to learn from China's governance experience.

Duque said as the two countries will embrace the 40th anniversary of forging diplomatic ties in February 2020, he hoped to further step up bilateral ties and expand cooperation in areas including economy and trade, energy, infrastructure construction, connectivity, the digital economy and creative industries.

Colombia welcomes investment from Chinese enterprises, said Duque, adding that he believed every bilateral project would help support the peace process of Colombia and the country's economic and social development.

Hailing the significance of the Belt and Road construction to world connectivity and international cooperation, Duque said Colombia will take an active part in the initiative.

Colombia attaches great importance to China's role in international and regional affairs and is willing to contribute to the development of Latin America-China ties, Duque said.

After the talks, the two presidents witnessed the signing of 12 bilateral agreements in areas including judicial cooperation, trade, agriculture, education and customs.

Duque is paying the state visit at the invitation of Xi from July 28 to 31. This is his first state visit to China. Before his arrival in Beijing, he visited the city of Shanghai, an economic hub in eastern China.