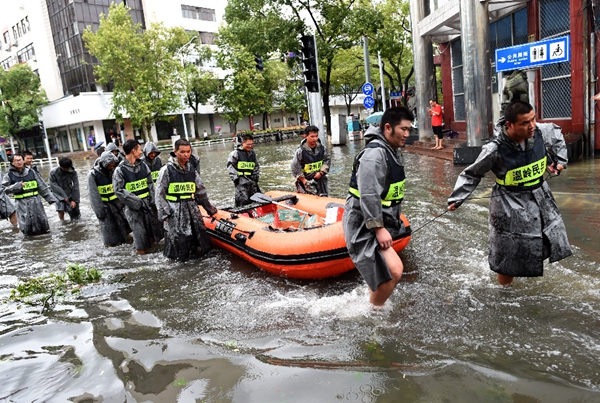 A total of 32 people died and 16 remain missing after Lekima, the ninth and strongest typhoon of the year, landed around 1:45 a.m. Saturday in the city of Wenling in eastern China's Zhejiang Province, the provincial flood control headquarters said.

Lekima packed winds of 187 kilometers per hour and brought heavy rainstorms. Zhejiang is often hit by typhoons in the summer, but Lekima is among top three strongest to have hit the province in history, weather experts said.

"Lekima is like a horse with an extremely fierce temper. It rakes in so much water as it forms off the ocean. Sustained downpours pushed a lot of rivers to very dangerous levels," said Luo Yuezhen, a top meteorologist with the Zhejiang weather service center.

In Zhejiang alone, more than 21,000 service personnel and militia members have been engaged in rescue and relief. They stacked sandbags, drained muddy water off the streets and rode on inflatable boats to evacuate residents who lived in the 1,600-year-old town of Linhai, where streets were completely submerged on Saturday.

Military rescue teams were called to the city of Taizhou in Zhejiang, where a large part of urban areas suffered power cuts, shortage of tap water and disruption of communication.

A total of 650 firefighters, soldiers, policemen and government agency staff are searching for nine people who are still missing in Shanzao village in Yongjia County. By Sunday, 23 people in the village have been confirmed dead after torrential downpours caused a landslide, blocked a river and submerged many homes.

"I heard a loud bang around 4 a.m. Saturday, and I climbed up to check and saw the first floor was already full of water. The water rose to the fourth floor in less than 10 minutes," said Pan Jianli, a resident.

"I was waiting for death and was so lucky to have been saved, but it's saddening to learn that so many of my folks have died," said Pan.

Xu Wenhai, a 59-year-old village official, was on his way back home when he saw the family of his neighbor trying to wade through knee-deep water and escape a crumbling house. He helped the children of his neighbors escape but did not have time to save the mother.

In Zhejiang, nearly 1.22 million people have been evacuated from their homes, and close to 5 million people were affected, said the provincial flood control headquarters.

Typhoon Lekima makes its second landing at 8:50 p.m. on Sunday on the coast of Huangdao district, the city of Qingdao, east China's Shandong Province, packing winds up to 82.8 km per hour, according to China Meteorological Administration.

A total of 26 reservoirs in Shandong have opened floodgates to release water as of 4 p.m. on Sunday. Six rivers in the province have seen obvious floods, said the provincial flood control and drought relief headquarters.
Heavy rain is expected to hit cities in Shandong, Hebei, Liaoning and Jilin, according to a statement released by the National Meteorological Center and the Ministry of Water Resources.

As of 5 p.m. Sunday, the super typhoon had impacted 6.51 million people in the provinces of Zhejiang, Jiangsu, Anhui, Shandong and Fujian as well as the Shanghai Municipality, said the Ministry of Emergency Management.

A total of 32 people died and 16 remain missing after Lekima, the ninth and strongest typhoon of the year, landed around 1:45 a.m. Saturday in the city of Wenling in Zhejiang Province.

Authorities have mobilized rescue and relief efforts, with the participation of firefighters, soldiers, policemen and government staff.