Along with traditional Myanmar music, the puppet show "The Prince" was vividly staged. By moving the thread, the puppetry player agilely controlled every action by the prince: raising the hand, jumping up or turning around... The show tells a prince's courtship of the princess.

The skillful performer is U Sein Aye Min, a famous puppetry artist in Myanmar. By lifting, pulling, hooking and stirring, he enlivened the puppets. “I like ‘The Prince’ most.” Among the 28 fixed characters in the Myanmar puppet shows, U Sein Aye Min has a special favor to the prince.

And he showed his passion to the prince either on the stage or in his theatric script. As time goes by, Sein Aye Min himself became a performing “prince” and a master inheritor of the puppet show.

Puppetry passed down for generations

For the U Sein Aye Min clan, the puppetry art has been passed down for four consecutive generations, becoming a natural part of his family tradition. "I grew up with puppet shows." Sein Aye Min said that his grandpa was also a famous puppet show artist in Myanmar.

Influenced by the grandfather, his father served as a puppetry professor at the Ministry of Culture of Myanmar. “I gradually fell in love with puppetry when watching my father’s shows in the childhood.”

At the age of 12, U Sein Aye Min made his debut. The moment his fingers moved, he found that the puppet's looks and actions changed in an instant. "As I went on playing, it seemed I brought the puppets back to life." From then on, U Sein Aye Min seriously followed his father’s step in puppetry.

“I worked hard every day!” Recalling his childhood, Sein Aye Min said his father asked him to practice the art 8 hours a day. It was tiring but he was happy and sort of talented in puppetry. He made greater progress than his peers.

Two months later, U Sein Aye Min was able to perform preliminary puppet shows on the stage, pulling 13 threads simultaneously. As time goes by, he could pull 36 threads, or even 60, getting more and more skillful in performance.

"Lifting, pulling, hooking and stirring, I repeated these actions day after day in the past 40 years, and I was increasingly in love with the 28 characters in the puppetry." U Sein Aye Min said that as a signature of the Myanmar culture, puppetry carries the commitment by his forefathers. He hoped that more young people would master puppetry, so that the traditional art could be passed down.

"My daughter is also fond of puppetry, sparing no effort in practicing the actions." U Sein Aye Min is proud of her hard work, which brings him new hope to pass down the puppet shows to future generations.

"Our puppet shows are featured by puppets made by ourselves.” U Sein Aye Min's home is filled with puppets with different sizes: from the 1.8-meter "giant puppet" and the 10-cm "tiny puppet"... With patience, he produced the puppets in persona. He said that it takes 5 steps to finish making the puppet: modeling, polishing, gilding, lacquering... None of the steps can be omitted. 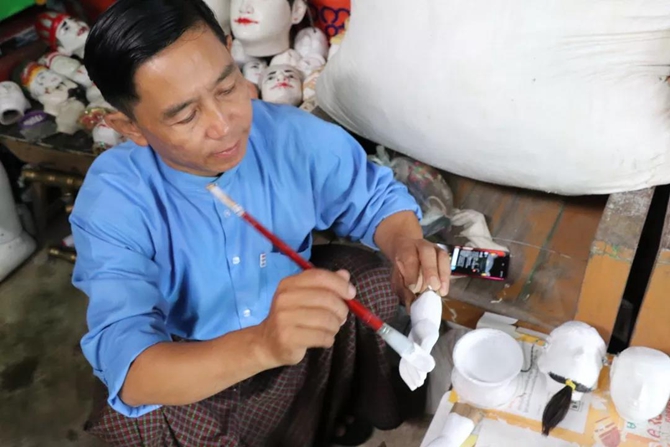 "This part needs to be re-polished." U Sein Aye Min could instantly tell from a pile of teak parts which are the "unqualified ones". He picked out one part for making puppet and refined it again and again. In polishing the parts, Sein Aye Min shared his experience in making puppets.

“Polishing is a key step in making puppets. Whenever you put a layer of paint on the puppet, you should carefully polish it in advance.” If it is polished properly, an ordinary puppet will be finished within a week. And it takes him over a week to complete fine puppet.

Then, U Sein Aye Min took out a puppet in a gorgeous coat from a wooden box. "This is my favorite puppet. I’ve kept it for 24 years." During Sein Aye Min’s visit to Beijing for cultural exchanges in 1995, he used this puppet to perform "The Prince”, on behalf of the Myanmar art delegation.

When it came to the China-Myanmar artistic exchange, Sein Aye Min could remember the details in the visit. At that time, the audience liked my puppet show a lot, giving me a big applause in return.

"China also has a long history in puppetry and I hope to perform with Chinese artists on the same stage in the future." Sein Aye Min saw a promising future for his career.