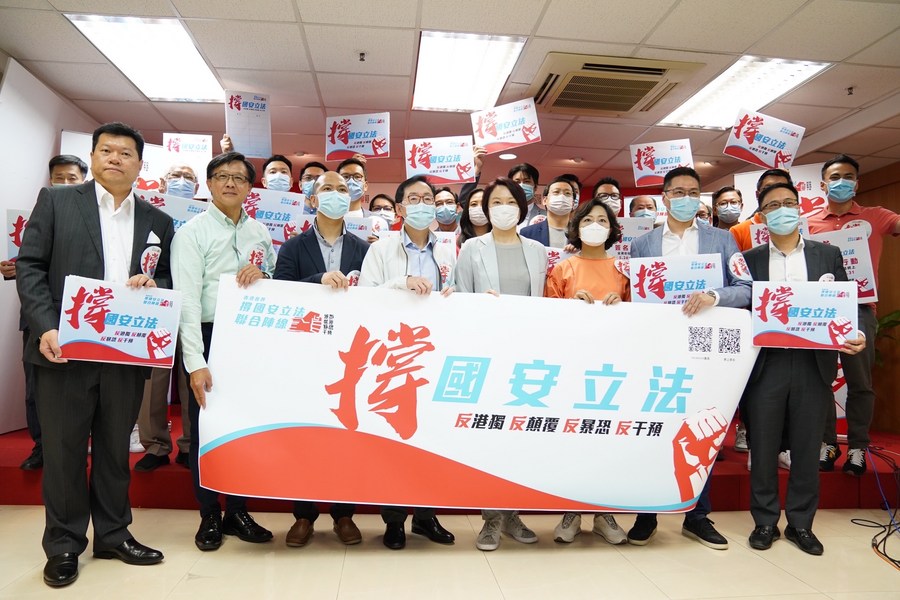 People from all walks of life attend a campaign in support of the national security legislation for the Hong Kong Special Administrative Region (HKSAR) in Hong Kong, south China, May 24, 2020. (Xinhua/Lui Siu Wai)

A draft law on safeguarding national security in the Hong Kong Special Administrative Region (HKSAR) that was reviewed by China's top legislature has been welcomed by the Hong Kong society.

The draft law, which was submitted for deliberation at the 19th session of the Standing Committee of the 13th National People's Congress (NPC) from Thursday to Saturday, has been hailed for taking into account Hong Kong's high degree of autonomy and legal differences and striking a perfect balance between safeguarding national security and protecting the legal rights and freedoms of the Hong Kong people.

Leung Chun-ying, vice chairman of the National Committee of the Chinese People's Political Consultative Conference (CPPCC), said the legislation reflects the vitality of principles of "one country, two systems", "the people of Hong Kong administering Hong Kong" and a high degree of autonomy.

He believes the legislation will restore stability in Hong Kong and ensure the smooth operation of "one country, two systems."

The contents of the draft law show that the central authorities are performing duties in accordance with law to plug loopholes in Hong Kong's legal system, which will help safeguard national security and the prosperity and stability of Hong Kong, said Maria Tam Wai-chu, deputy director of the HKSAR Basic Law Committee under the NPC Standing Committee.

Priscilla Leung Mei-fun, chairwoman of the HKSAR Legislative Council's Panel on Administration of Justice and Legal Services, said the draft law stipulates that the relevant law enforcement, prosecution and other work will mainly be carried out by the HKSAR government, which reflects the central government's trust in the HKSAR government.

The draft law stresses that the rights and freedoms stipulated in the Basic Law and related international covenants will be protected, showing that the central authorities are committed to guaranteeing the human rights of Hong Kong residents, Priscilla Leung noted.

She emphasized that the law targets only a tiny number of criminals endangering national security while the vast majority of Hong Kong residents are law-abiding and will not be affected.

Gu Minkang, former deputy dean of the law school of City University of Hong Kong, said the draft law takes into account the characteristics of the common law and will not prejudice the existing judicial and common law systems in Hong Kong.

The common principles of the rule of law in the world are also reflected in the draft law, including no crime without the law, the presumption of innocence, protection against double jeopardy, protection of rights of defendants, and fair trial, he pointed out.

The draft law provides that the central government shall establish an office of safeguarding national security in the HKSAR.

As stipulated in the draft law, the office will perform the duty of safeguarding national security and accept supervision in accordance with law, and will not harm the legitimate rights and interests of any individual or organization, Gu said.

The draft law provides that the central government's office of safeguarding national security in Hong Kong and related organs may exercise jurisdiction over a tiny number of criminal cases that jeopardize national security under specific circumstances.

Tong Ka-wah, a member of the HKSAR Executive Council, said the adviser will provide significant materials and opinions on national defense and foreign affairs.

Fan Hsu Lai-tai, former president of the HKSAR Legislative Council, believes the legislation will effectively crack down on violence, bring back peaceful lives to Hong Kong residents, and push the economy back on track.