-The new grim milestone reached faster than expected has proved that the global epidemic situation remains grave and that the international community should keep vigilant and join hands to fight harder.

- The Americas are a cause for concern. The United States has by far ranked first on the CSSE global tally, with more than 2.5 million confirmed cases and over 125,000 deaths nationwide.

- Many European and Asian countries have witnessed reassuring signs of the pandemic fight at home and gradually started easing restrictions and reopening their economies with precautions. 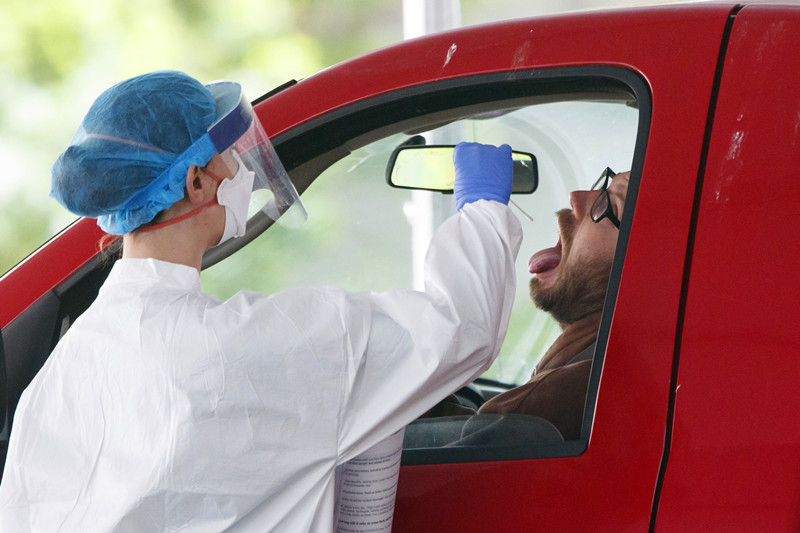 A medical worker takes a swab sample at a COVID-19 drive-thru testing site in Washington D.C., the United States, May 19, 2020. (Photo by Ting Shen/Xinhua)

Global confirmed COVID-19 cases topped 10 million on Sunday, with nearly 500,000 deaths worldwide, according to data compiled by the Center for Systems Science and Engineering (CSSE) at Johns Hopkins University.

The new grim milestone, reached faster than expected, has proved that the global epidemic is grave and that the international community should remain vigilant.

Furthermore, as the sweeping pandemic is causing a deep economic contraction, world leaders and experts have stressed the urgency of strengthened coordination to jumpstart a global economic recovery.

The momentum of infections worldwide has been accelerating over the past month -- while it took eight days for the global tally to increase from 6 million to 7 million in early June, it only took six days this time for the number to reach 10 million from 9 million.

The Americas are a cause for concern. The United States has by far ranked first on the CSSE global tally, with more than 2.5 million confirmed cases and over 125,000 deaths nationwide.

Robert Redfield, chief of the U.S. Centers for Disease Control and Prevention, said Thursday the number of people in the United States who have been infected is likely to be 10 times higher than reported.

"We are facing a serious problem in certain areas," Anthony Fauci, director of the National Institute of Allergy and Infectious Diseases, said Friday.

Due to rising cases and growing concern about the virus's spread across the country, 12 U.S. states have rolled back or paused reopening plans, according to a tally by CNN on Saturday.

Although a few states are meeting the benchmarks that experts recommend to lift restrictions, "most never fully controlled their outbreaks, instead forging ahead with reopening," Correspondent German Lopez wrote in a story posted by news website Vox on Saturday. "A mix of carelessness and partisanship is to blame."

Meanwhile, the situation is not at all ebbing in the region of Latin America and the Caribbean. Brazil, the second hardest-hit in the world, has registered 1,313,667 confirmed cases and 57,070 deaths by Saturday.

Peru, with the second largest caseload in Latin America, hosts the sixth-highest number of infections in the world. Its caseload has reached 275,989 with 9,135 deaths by Saturday.

Chile and Mexico are also among the countries with high infections in the region.

Paramedics take part in a parade to commemorate medical personnel who lost their lives in the COVID-19 pandemic in Mexico City, Mexico, May 30, 2020. (Photo by Sunny Quintero/Xinhua)

"I would characterize the situation in the Americas in general, and in Central and Latin America as still evolving and not having reached its peak yet, and likely to result in a sustained number of cases and continued deaths in the coming weeks," said Michael Ryan, executive director of World Health Organization Health Emergencies Program on Wednesday.

Still, there is light at the end of the tunnel. Many European and Asian countries have witnessed reassuring signs of the pandemic fight at home and gradually started easing restrictions and reopening their economies with precautions.

Italy, once the epicenter of COVID-19 in Europe, recorded 175 fresh confirmed cases and eight new deaths on Saturday, down from 259 and 30, respectively, on Friday.

The Italian central government and the Conference of Regions, which comprises governors of all the 20 regions and autonomous provinces, agreed on Friday that schools across the country will reopen for remedial classes on Sept. 1.

In France, cafes, restaurants and bars throughout the country are reopening, along with swimming pools, museums, libraries, schools and cinemas. The Eiffel Tower, France's landmark monument, also reopened on Thursday with strict virus restrictions.

The country is launching a "large scale" testing campaign to identify any "dormant clusters" and to get ready for a potential resurgence of the epidemic, Health Minister Olivier Veran said Thursday.

Hans Kluge, WHO regional director for Europe, said Thursday he saw a light of hope in the messages he received from health ministers in Europe that more and more people were being socially responsible and "adhering to physical distancing and wearing facial masks."

Furthermore, Asian countries with a flattened curve of infected cases, such as Sri Lanka and the Philippines, are also gradually loosening the grip to give their severely affected businesses and people a chance to relax and revive.

With the spread of the virus at home basically under control, China is now steadily reviving its economy while continuing adopting strict anti-epidemic measures.

Currently, over 10,000 A-level tourist attractions in the country have reopened to the public, said the Ministry of Culture and Tourism, adding the number of tourists is limited to 30 percent of the maximum visitor capacities during holidays.

China has also been actively contributing to the global anti-epidemic fight and the building of a community of health for all in a bid to bolster global health. Apart from donating much-needed medical supplies, dispatching teams of medical experts and sharing epidemic information via video conferences, it has also been racing against time to find an effective COVID-19 vaccine, which it announced will be made a public good for all when available. 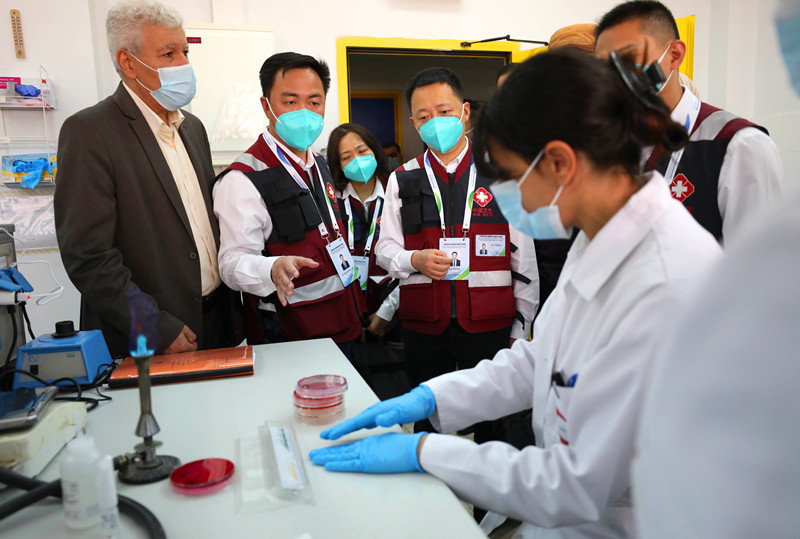 WHO Chief Scientist Soumya Swaminathan said Friday at least four Chinese companies are moving from phase two to phase three trails for vaccine candidates, and the WHO is in the process of signing confidentiality agreements with them.

"Vaccines, diagnostics and therapeutics are vital tools -- but to be truly effective they must be administered with another essential ingredient, which is solidarity," WHO Director-General Tedros Adhanom Ghebreyesus said Friday.

Calling the COVID-19 pandemic the latest wake-up call "heard by everybody," David A. Chikvaidze, chef de cabinet to the director-general of the United Nations Office at Geneva, told Xinhua that a common reaction from many countries would be that they need to work together.

During the Extraordinary China-Africa Summit on Solidarity against COVID-19 held on June 17 via video link, Chinese President Xi Jinping called solidarity and cooperation "the most powerful weapon" against COVID-19.

And such calls have extended to the realm of world economy, which has been hit hard by the pandemic.

The International Monetary Fund (IMF) on Wednesday revised down its forecast for the global economy amid mounting COVID-19 fallout, warning of record debt levels in both advanced and emerging markets and developing economies.

Global output is projected to decline by 4.9 percent in 2020, 1.9 percentage points below the IMF's April forecast, followed by a growth at 5.4 percent in 2021.

Stressing that this is a crisis like no other, the IMF said in a report "strong multilateral cooperation remains essential on multiple fronts," adding "policymakers must cooperate to resolve trade and technology tensions that endanger an eventual recovery from the COVID-19 crisis."

In a statement of the 36th ASEAN (the Association of Southeast Asian Nations) Summit released Saturday, ASEAN leaders announced the establishment of the COVID-19 ASEAN Response Fund, and noted that free trade agreements and comprehensive economic partnership agreements are important in contributing to the post-pandemic recovery and in creating resilient supply chains.

"We are calling for countries to address the economic grievances that are behind the tension that we see, to address the gaps in the multilateral rules-based trading system, to adapt it to the changing global economy," Malhar Nabar, division chief of the World Economic Studies Division in the IMF's Research Department, told Xinhua.