Wuhan lockdown, a game-changing decision in China's fight against COVID-19 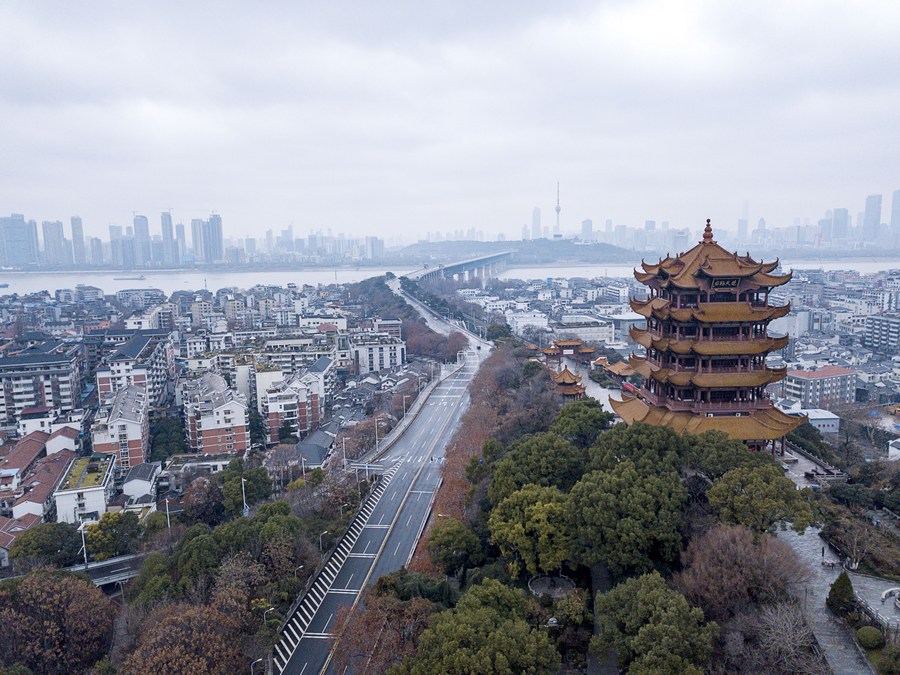 Aerial photo taken on Jan. 26, 2020 shows the Yellow Crane Pavilion and the Yangtze River Bridge during a lockdown to contain the epidemic in Wuhan, central China's Hubei Province. (Xinhua/Xiong Qi)

As China held the meeting to commend role models in the fight against the COVID-19 epidemic at the Great Hall of the People in Beijing, it is especially meaningful to bring to mind a game-changing decision made by President Xi Jinping at a crucial juncture of the anti-epidemic battle: locking down the central megacity of Wuhan.

The city of over 10 million residents pressed a "pause" button to contain the spread of the rampaging novel coronavirus after Xi's instruction on the afternoon of Jan. 22 led to the suspension of all public transport and outbound travel and a ban on people stepping out of homes.

It was only after 76 days of arduous efforts led by Xi that the Chinese people achieved decisive results in Wuhan's defensive battle against the invisible enemy, and made strategic achievements in the nationwide epidemic prevention and control campaign.

Xi, also general secretary of the Communist Party of China (CPC) Central Committee and chairman of the Central Military Commission, said making the decision required enormous political courage. "But time calls for resolute action. Otherwise, there would be trouble," he said.

Xi has stressed putting people's lives and health first and placing their interests above anything else. He said all prevention and control measures by the CPC Central Committee were taken with the primary objective of preventing infections among the people and saving lives.

"It was an important measure to contain the COVID-19 spread during the early stages of the outbreak, and significantly helped cut the infection rates in other places," said Ding Xiangyang, deputy secretary-general of the State Council, China's cabinet.

One of the strictest and most comprehensive public health measures in modern human history, the lockdown in Wuhan proved effective in curbing the spread of the deadly virus, said a senior official with the National Health Commission.

If the government had not acted to shut down the city, the number of infected people in China would have been higher by more than 700,000, according to analyses of 15 top global research institutions.

On the ground, the lockdown in Wuhan entailed efforts beyond mere restrictions on the movement of people and channels of exit from the city.

The country took immediate steps to ensure medical treatment and the supply of daily necessities for people.

When visiting Wuhan in March, Xi took charge of the response and gave important instructions on fighting the virus, making a special request to officials to supply more fish, a favorite food of the people of Wuhan.

"Let's keep it up! Hold on for a little longer!" Xi said, encouraging local residents in lockdown.

Over the past few months, Xi has led the country's efforts to coordinate epidemic prevention and control, and social and economic development based on the fast-changing situations both at home and abroad.

The country managed to effectively contain the spread of the virus with strenuous efforts.

On March 11, the number of newly confirmed coronavirus cases in Wuhan came down to single digits for the first time. On April 26, hospitals in Wuhan were free of all COVID-19 cases. As of June 15, the city had no asymptomatic cases and there were no more close contacts under medical observation.

With less than 0.006 percent of its domestic population infected, the country has brought the virus under control, creating a miracle in the battle against infectious diseases in the history of humanity.