China's eight-day Golden Week holiday has reflected the country's impressive recovery and its economic bounce back from the COVID-19 epidemic, with more than half a billion people on the move for a long-awaited vacation and factories stepping up production to complete new orders.

Amid regular epidemic control, the peak season of tourism-driven consumption boom for National Day celebration that coincides with the traditional Mid-Autumn Festival this year was also a test field for China's new economic development pattern of "dual circulation."

As a pivotal part of the "dual circulation" development pattern floated by China's top leadership in May that encourages domestic and overseas markets to reinforce each other, the country's enormous market and expanding domestic demand during the holiday has gathered sound momentum for China's economy to further perk up.

The total number of domestic tourists nationwide is previously expected to reach 550 million during the holiday, while statistics from the Ministry of Culture and Tourism showed that a sizable 618 million domestic tourist visits were made in the first seven days, generating overall tourism revenue of 454 billion yuan (about 66.9 billion U.S. dollars).

In Wuhan, the heroic city once hard hit by coronavirus but has restored its vigor, visitors ambled by the Yellow Crane Tower as the historic building launched night tours for the first time since its opening to the public in 1985 after reconstruction. The landmark topped the "country's hottest scenic spots" rankings by China's largest online travel agency Trip.com Group. 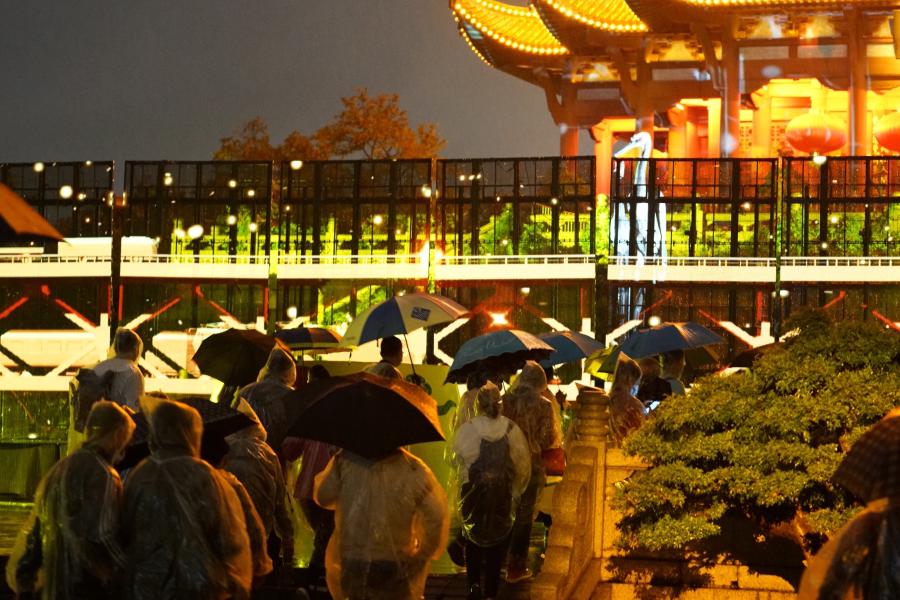 "The Wuhan Yangtze River Bridge is the same as usual, so is the roaring Yangtze flowing eastward," Wang Yu, a tourist from Hubei's Enshi City, said while enjoying a distant view on top of the tower.

"What's different is the heavy traffic on the bridge and the passing cargo ships on the river. Wuhan returns to life!" Wang said.

Top scenic sites in central China's Hubei Province received over 2.07 million visitors in the first seven days of the holiday, according to the provincial culture and tourism department, with 30 key scenic sites raking in 205 million yuan from Oct. 1 to Oct. 7.

In Beijing, more than 90,000 people, standing in the drizzling autumn rain, gathered at Tian'anmen Square on Oct. 1 and burst into cheers as the five-starred red flag was hoisted to the top of the flagpole, accompanied by the national anthem. 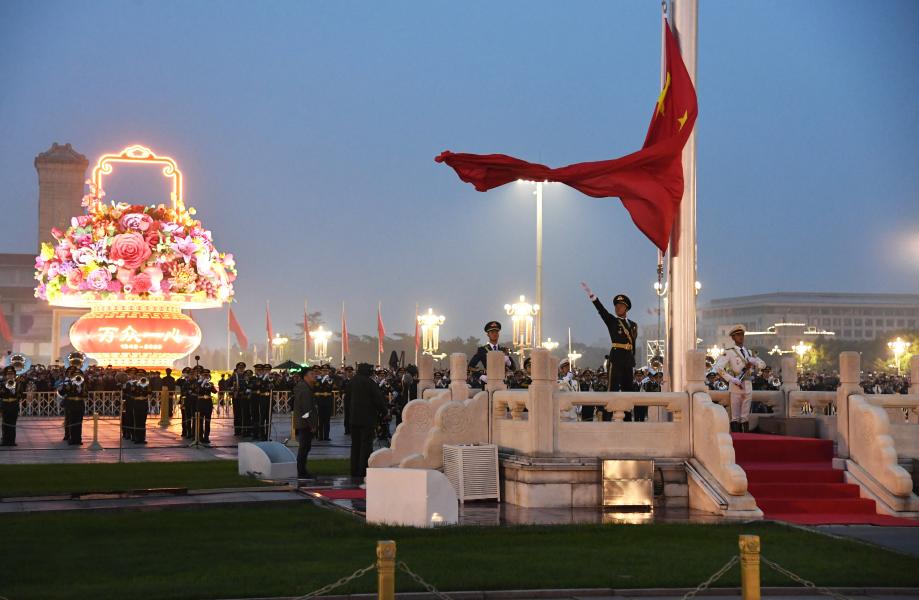 A flag-raising ceremony to celebrate the 71st anniversary of the founding of the People's Republic of China is held at the Tian'anmen Square in Beijing, capital of China, Oct. 1, 2020. (Xinhua/Ren Chao)

According to the Beijing Municipal Administration of Cultural Heritage, some 40 museums in the city have offered more than 100 special cultural activities for the holiday, with 13 museums extending opening hours or providing night-time activities on Oct. 1, on which the Mid-Autumn Festival fell.

The Palace Museum, also known as the 600-year-old Forbidden City, raised for the third time its daily visitor cap up to 30,000 since it partially reopened from May 1.

Unlike in previous years, some museums have moved part of their activities online while maintaining on-site visits to avoid crowd gathering during this year's Golden Week, said Li Yang with the administration.

The Beijing Road pedestrian street in the southern city of Guangzhou, after two years of modification, took on a new look with full 5G coverage and attracted over 4 million visitors during the holiday, with a sales turnover of more than 600 million yuan, up 160 percent year on year.

"I made travel plans and booked the tickets before setting out," said Li Lin from Beijing who visited the Wulingyuan scenic area in Zhangjiajie.

She was very much impressed by the smart face-scanning quick pass, noise-free wireless audio guide, clean and tidy tourist trails, as well as zero-contact customer services. "The distinctive scenery, good tourism facilities and services have offered me a great travel experience." 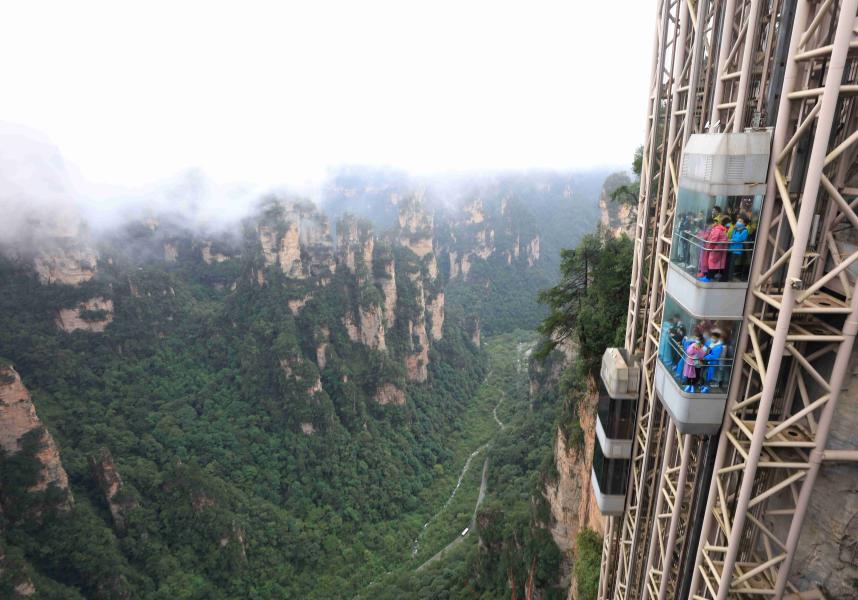 Chinese card payment giant China UnionPay saw its online payments go up by 9.6 percent year on year to 921.5 billion yuan during the first three days of the holiday, with payments over its network exceeding 330 billion yuan on Oct. 1, an increase of 15.5 percent over the same day of last year.

Data from Alibaba's travel agency Fliggy showed that stimulated by the company's 10-billion-yuan subsidy campaign and coupons introduced by local governments to revive tourism, hotel bookings nationwide surged by more than 50 percent year on year during the holiday, while both air ticket and scenic spot bookings rose by 16 percent year on year.

"In any year, the outlay of the weeklong holiday is a closely watched barometer of the country's economic health," the New York Times reported, noting that this year's holiday offered "the clearest measure yet of China's recovery from the pandemic."

The huge consumption potential during the Golden Week will not only accelerate the recovery of China's domestic economy but also drive imports and investment from other countries, as the booming "holiday economy" fuels internal circulation and promotes external circulation at the meantime, offering a strong boost to global trade and the world economy. 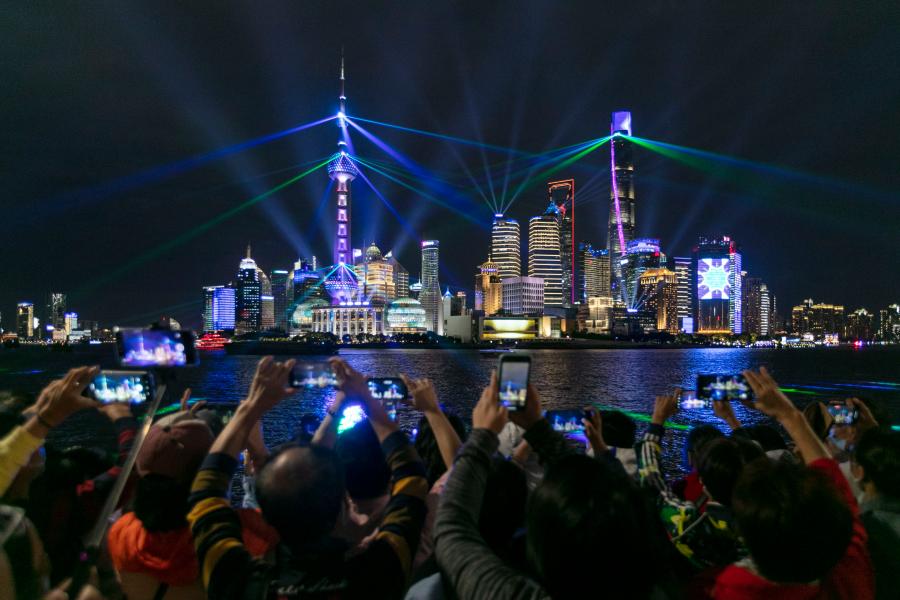 Gu Qingyang, an associate professor at the Lee Kuan Yew School of Public Policy at the National University of Singapore, noted that holiday consumption will help boost the service sector and promote more balanced development between other industries that bore the brunt of the epidemic.

As transportation, tourism and other sectors witnessed unleashed domestic demand during the holiday, production and trade have also bounced with remarkable speed.

With less than 500 days to go, construction of the 2022 Beijing Winter Olympics venues has entered the home stretch, with over 10,000 workers choosing to remain employed during the vacation.

Construction workers are focusing on interior decorations and making ice at the National Speed Skating Oval, locally known as the "Ice Ribbon," which boasts the most extensive full ice design in Asia, with an ice surface area of 12,000 square meters.

"On every National Day we watch the live broadcast of the flag-raising ceremony at Tian'anmen Square, drawing strength to better devote ourselves to the construction work," Song said.

Workers of the Guangzhou Lianrou Machinery and Equipment Co., Ltd., a mattress machine and spring mattress manufacturer in the Yunpu industrial area in Guangzhou, have spent their holiday working extra shifts for new orders.
"It has been our busiest National Day holiday, our confirmed orders are scheduled until next February," said Tan Zhiming, vice chairman of the company.

With 60 percent of its products sold overseas, Lianrou once saw its production capacity drop by 70 percent during the epidemic. The company's orders started to pick up in May, with orders in August and September doubled year on year.

China's economic recovery continued to gather steam with improving major economic indicators including retail sales of consumer goods, industrial output, the export of goods and the purchasing managers' index for the manufacturing sector. The country has become the only major economy projected by the World Bank to achieve positive growth in 2020.