In the 1950s and 60s, most Chinese relic restorers began to fuse tradition into modernity in repairing cultural antiques. In southwest China’s Yunnan province, however, such integration was initiated much later in the 1980s, when Mu Rui, a graduated chemistry major back then, kicked off her career at Yunnan Provincial Museum.

So far, Mu has worked in the Yunnan museum for 37 years, becoming an authority in the field of relic restoration. She repaired a diversity of relics, involving bronze ware, stone vessels, pottery, jades, horns, carpentry, bamboo ware, and textiles.

Relics 'doctor' in the museum

At 3:00 pm, the exhibition halls of Yunnan Provincial Museum see visitors coming and going, while the relic-repairing room remains quiet. Various tools lie on the worktable: a grinding stone, a mini file, a scalpel, a stone-carving knife, an alcohol burner, medical swabs and others. Having taken out an unfinished bronze ware from a temporary storage room, Mu Rui sat down at the desk and started repairing work. It is a sculpture in the shape of a human. With the bronze relic in her hand, Mu needs to clear the dust and dirt on it. 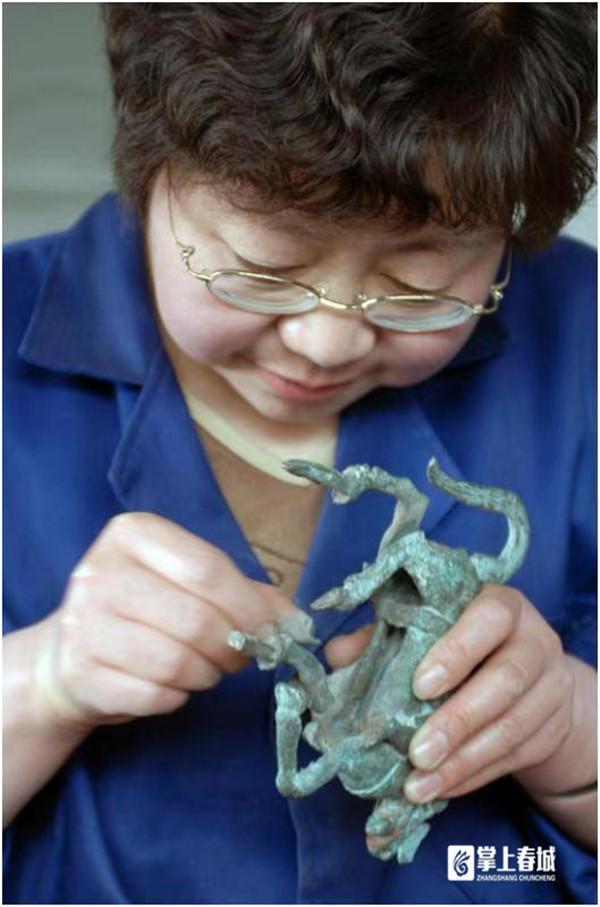 Holding a mini scalpel, she cleansed the bronze figure with strokes either gentle or forceful accordingly. The outward clean-up was followed by removal of harmful patina with a chemical reagent. Mu finally sealed the bronze relic with a protective film.

Once, Mu Rui restored a cone-shaped antique that had broken into two — a striped bronze hairpin with the peacock-biting-snake pattern. It was not difficult to amend the hairpin technically, but the challenge lies in the deep mineralization from aging. So the repairing work calls for full care, and any carelessness will ruin the whole work.

“The bronze hairpin is surfaced with a thin layer of bright rust, and it is hard to be removed. Besides, the hairpin is heavily weakened, so it is tricky to restore the surface in a coordinated way and without damaging the relic’s body.

Relic protection is a systematic endeavor that involves various disciplines in sciences, and quite often it is also related to certain marginalized subjects that may go well beyond your imagination. Starting from restoration of ancient buildings and portable relics, Mu Rui restored the damaged relics and prevented them from further decadence, formulating a diversity of prescriptions. It is really difficuly to make the first breakthrough, but she always braved the challenges with the conviction that protection and prevention should go hand in hand so that the restoring effect will be maximized. “We’re not doing simple repairing work, and what is needed more is to create a favorable environment for relic conservation. This is generally accepted by international relic restorers.”

Last year, Yunnan Provincial Museum joined hands with China Central Conservatory of Music in an endeavor — bringing back to life the violin used by Nie Er so that it could re-sound on the occasion of the 70th founding anniversary of the People’s Republic of China (PRC). Nie Er, a Yunnan native, is the late composer of the PRC’s national anthem: "March of the Volunteers."

“I first came up with the idea in 2008 when I caught sight of my daughter’s violin one day. Then it occurred to me that Nie’s violin is not just a relic but a musical instrument. And maybe I can make it sound again,” Mu Rui wondered. Recommended by a friend, Mu contacted Gao Can, a violinist at China Central Conservatory of Music in 2016. “This is not only a relic restoration, but also a cross-field cooperation, for the repair work must follow the dual standards in relic restoration and instrument repairing,” said Mu. Thanks to her dedication, Nie’s violin was brought back to life, and the restored relic appeared in “National Treasure,” a grand cultural exploration program by CCTV.

Over the past decades, Yunnan Provincial Museum has made strides in relic restoration. “Now, the relics are filed, with the restored ones reported like cured patients, so that the future restorers will be well-informed and exempted from mistakes or labor in vain.” Before the relics are dealt with, there should be a corresponding assessment, where non-invasive testing methods are used for relic protection and restoration. Only when a problematic relic’s current conditions and future possibilities are fully assessed, with its 'diseases' tested and identified, can the restoring plan be formulated.

“A real repairer needs to gaze at the relics, engaging in hearty communication with them. Only in this way, can he fully appreciate the pieces and carry out the restoration sensibly,” said Mu.