The nine biggest lakes in Yunnan province sit like two strings of pearls on the red earth plateau of southwest China. 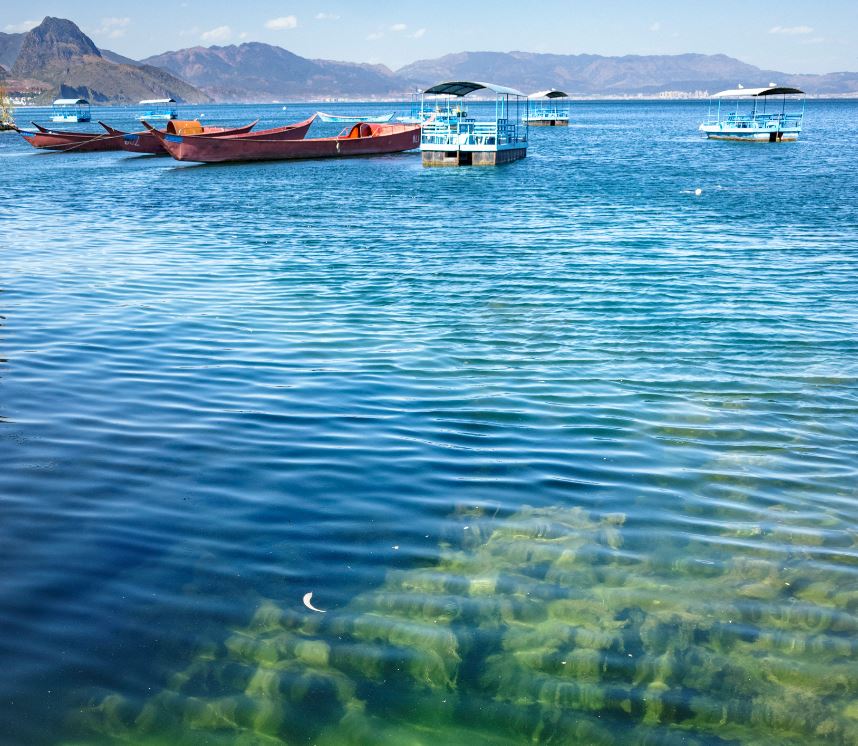 The lakes, each with an area of more than 30 square kilometers, have a vital role to play in several respects, including preventing floods, providing drinking water and irrigation for farming, and attracting tourists.

Erhai Lake, the second-largest of the lakes and a popular scenic spot, has made progress in treating pollution and has become a role model for the others.

The lake remains a popular destination for city dwellers looking for a taste of the pastoral life. But while the surge in visitors and settlers brought prosperity to the Dali Bai autonomous prefecture, which sits on its shores, the lake gradually lost its luster.

The large numbers of tourists and migrants who came to Erhai led to increased demand in many sectors, but the farms, property developments and hotels that catered to their needs discharged pollutants into the lake.

For the local government, cleaning up the water meant curtailing or suspending those industries and forgoing lucrative sources of tax revenue.

President Xi Jinping has always attached great importance to the protection and improvement of the country's water system, as well as the balance between economic development and environmental protection.

In 2015, during an inspection tour of Yunnan, Xi, who is also general secretary of the Communist Party of China Central Committee and chairman of the Central Military Commission, visited Erhai and called on residents and the local government to protect it.

During his tour, Xi had a photo taken with local officials beside the lake and said he hoped its water quality would be improved when he made his next visit.

In 2017, Yunnan announced a series of measures, including bans on hotels and crops that used too much fertilizer, to protect Erhai from agricultural — and tourist-related runoff.

The policy led to a sudden deceleration of the fast-growing economy around the lake and caught many people unprepared.

But the improvement in the water quality two years later showed the people of Dali a greener path to development and their concerns eased.

Zhang Furong, a former innkeeper in Dali, was told in 2018 that his 1,300-square-meter hotel would have to be demolished because it was located within 100 meters of the lake's shore, in an area reserved for a protection zone.

The 45-year-old spent about 10 million yuan (US$1.4 million) to build the hotel in 2014 and he received 6 million yuan in compensation from the government when it was demolished.

"At that time, we innkeepers didn't understand it and refused to sign the contracts agreeing to demolition," he said. "We were worried about our future. I was the first to accept it because I knew the government would protect Erhai Lake and there was no need to oppose it."

The ear-shaped lake lies parallel to Cangshan Mountain and 18 streams from the mountain flow into it. Due to the pleasant weather all year round, a constant stream of tourists visit Dali.

On the lake's eastern shoreline, people can view the beautiful scenery of both the lake and the mountain, with dramatic clouds reflected in the water.

From 2011 to 2016, the number of tourists visiting Dali annually increased from about 15 million to 39 million, making the area increasingly crowded and polluted.

The local government said the rapid but disorderly development of the booming tourism industry gave the lake no chance to rest or recover, and the infrastructure needed to protect it, such as sewage treatment facilities, was not in place.

In 2018, the government announced that 1,806 households or homestay hotels needed to be demolished to transform the lakeside into an ecological park.

Meanwhile, all the ongoing construction projects on Erhai Lake's eastern shore were ordered to stop.

The government's actions had an immediate effect on the number of tourists visiting Erhai and Cangshan Mountain, which fell to 19.8 million in 2018, down 3.6 percent from 2016, even though tourist visits to the prefecture rose by 20 percent to 47 million.

Zhang, the innkeeper, said he was positive about his future and Dali's.

"I have restarted my business outside the protection zone," he said. "Everything will be fine and back on track. The water quality of Erhai Lake is becoming better and tourists will be attracted back so that our business will boom again."

China has 2,865 lakes that cover at least 1 sq km, and Zheng Binghui, a water environmentalist at the Chinese Research Academy of Environmental Sciences, said about one-third of grain production took place in the country's lake basins, along with similar amounts of industrial and overall agricultural production.

"From the 1990s, lakes that had been severely polluted by discharges and disturbed by human activities lost their chemical balance and suffered from aquatic bloom outbreaks, which had a serious impact on drinking water safety and the lake ecosystems," Zheng wrote in Democracy and Science magazine in 2018.

Since 1998, the country's top environmental watchdog has been reporting annually on the water quality of China's three most polluted major lakes－Taihu, Dianchi and Chaohu. For more than a decade they were rated below Grade V, the lowest level in the nation's five-tier water quality grading system.

In 2007, the central government launched a technology-focused response to water pollution in the three lakes, as well as Erhai and the Three Gorges Reservoir.

Production processes in key industries such as printing, dyeing and food manufacturing near Taihu Lake, in Jiangsu province, were reviewed to ensure that discharges and emissions met standards. About 405 kilometers of lake shoreline has also been restored as an ecological belt that serves as a buffer zone to protect Taihu from pollution.

In 2016, Taihu Lake became the first of the three major lakes to have no water rated below Grade V and last year more than 90 percent of its water reached Grade II or III, according to an annual report published by the Ministry of Ecology and Environment.

In Dali, government efforts to curb pollution have also paid off.

For seven months of last year, the water quality of Erhai Lake was Grade II－classified as high－a month longer than in 2017, the local government said.

In the Dianchi Lake Basin in Kunming, capital of Yunnan, industrial enterprises have retreated from the lake area to minimize pollution.

Last year, one-third of the water in Dianchi Lake was rated Grade II, whereas none met that quality standard in 2018.
During a visit to a wetland at the northern end of Dianchi Lake in January this year, President Xi reiterated the importance of ecological civilization and green development.

In 2018, China appointed 24,000 lake chiefs to help protect their ecosystems, in the same way that its river chiefs protect rivers.

Lake chiefs supervise aquatic resource protection, pollution prevention and control, and environmental restoration. Their performance is assessed and they are held accountable for environmental damage.

Chen Jian, Party secretary of the Dali Bai autonomous prefecture, told China Daily in August that he attributed the effectiveness of pollution treatment at Erhai to the area's residents. He said that without their support, the government could not continue its work.

"At the beginning, most of them didn't support the bans," Chen said. "After we explained the importance and necessity of protecting Erhai Lake and talked with them about the pollution they generated, they changed their attitude from resistance to understanding."