The figure marked an increase of 23.4 percent from the pre-epidemic level in 2019, according to the General Administration of Customs (GAC).

Both exports and imports continued double-digit growth in the first nine months of the year, surging 22.7 percent and 22.6 percent from a year earlier, respectively.

As the pace of the global economy and trade picked up, demand in the international market contributed to China's foreign trade expansion, Li said, adding that price hikes of international commodities also pushed up China's imports.

China has taken a slew of measures in 2021 to ramp up foreign trade growth, including accelerating the development of new business forms and modes, further deepening reform to facilitate cross-border trade, optimizing its business environment at ports, and promoting reform and innovation to facilitate trade and investment in pilot free trade zones.

These measures have led to the continuous growth of China's foreign trade, said Li, and they not only boosted business confidence but also injected strong vitality into China's opening-up. 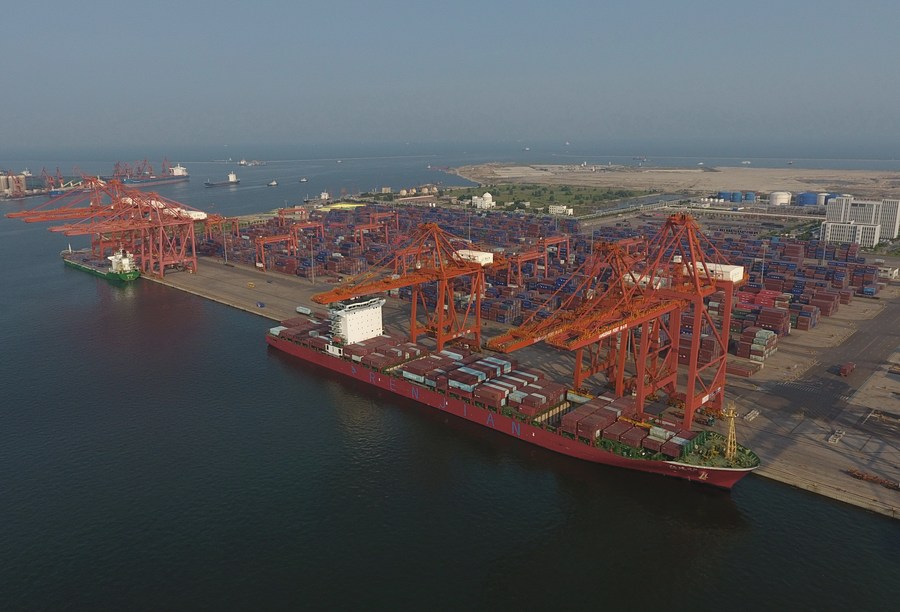 In the January-September period, China's trade with its top three trading partners -- the Association of Southeast Asian Nations, the European Union and the United States -- maintained sound growth.

During the period, the growth rates of China's trade value with the three trading partners stood at 21.1 percent, 20.5 percent and 24.9 percent, respectively.

The rapid growth of trade between China and the United States reflects great complementarity in industrial and trade structures as well as the trade potential between the two countries, said Wen Bin, chief analyst at China Minsheng Bank.

China's trade with countries along the Belt and Road rose 23.4 percent year on year during the same period, while the country's trade with members of the Regional Comprehensive Economic Partnership climbed 19.3 percent, customs data shows.

Statistics show that China's exports and imports accounted for approximately 13.2 percent of the global total in the first half of the year, up 0.8 percentage points over a year earlier.

Private enterprises saw imports and exports increase 28.5 percent to 13.65 trillion yuan in the first nine months, accounting for 48.2 percent of the country's total.

The imports and exports of state-owned enterprises rose 25.1 percent to 4.35 trillion yuan in the period.

The country's imports and exports in cross-border e-commerce soared 20.1 percent year on year in the period.

The foreign trade of China's central and western regions surged 27.2 percent year on year, 4.5 percentage points higher than the growth rate for the whole country during the same period.

Li also warned that China's foreign trade continues to face a number of unstable and uncertain factors as the global economy struggles to recover and the external environment becomes more complicated.

Considering the high base of 2020, China's foreign trade growth may be slower in the fourth quarter, but the overall positive trend will not change, and the country's foreign trade is expected to log steady growth throughout the year, Li said.