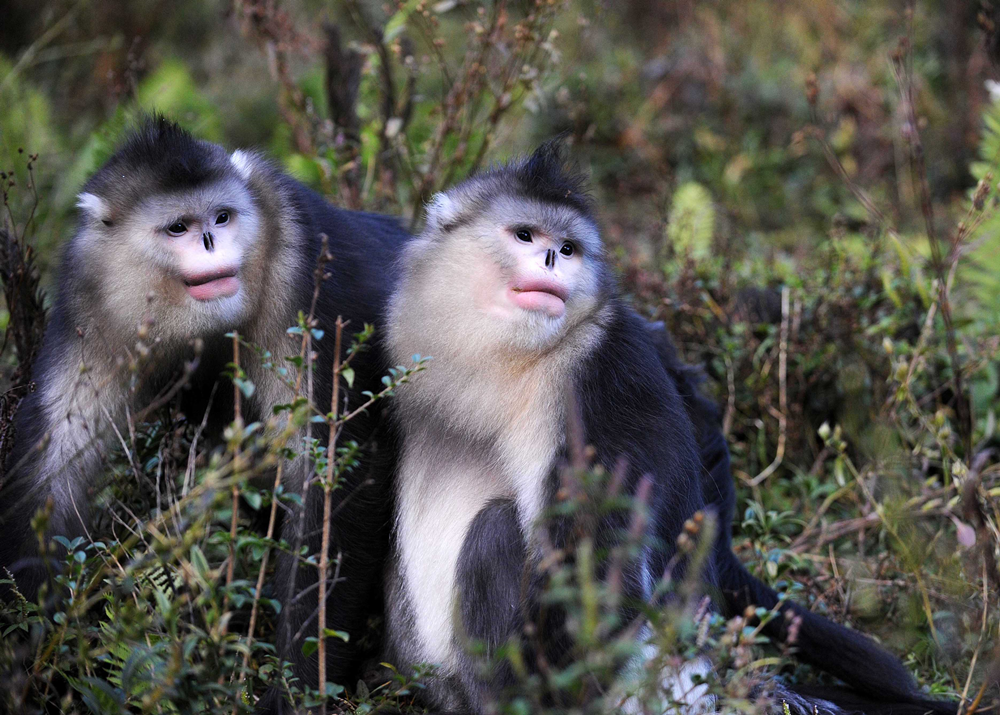 Yunnan snub-nosed monkeys cling to each other at the Baima Snow Mountain Nature Reserve. [Photo/Xinhua by Yan Yiguang]

Environment minister tells meeting that 18% of land is under protection

In a move to ramp up biodiversity conservation, China is mulling a guideline to incorporate the issue as a key task in the 2021-25 plans of government bodies and regions, Minister of Ecology and Environment Huang Runqiu said on Sept. 8.

Biodiversity decline has been essentially curbed in China, Huang said at a forum held in Beijing during the annual general meeting of the China Council for International Cooperation on Environment and Development.

Established in 1992, the council is a high-level international advisory body comprising officials and experts from China and abroad－with some joining via video link－who provide policy advice to the Chinese government. Huang is executive vice-chairman of the council.

With 11,800 protected areas, China has brought 18 percent of its land under protection, reaching 17 percent, one of the 2010 Aichi Biodiversity Targets, ahead of schedule, Huang said.

He said China has drawn red lines that encircle 25 percent of the country's land since the issuing of a guideline by the central authorities in 2017. Such red lines are frequently used in China to describe geographic boundaries that should not be crossed.

The "red line" strategy will cover regions with important ecological functions, including water and soil conservation and biodiversity maintenance, along with ecologically fragile regions which are prone to soil erosion, desertification and salinization.

Huang said that with the establishment of over 250 bases for wild animal rescue and breeding, China has restored or increased the population of over 300 endangered species.

He said China maintains an unwavering stance toward biodiversity-related crimes and violations, and for years has rolled out special inspections in protected areas.

Aside from promoting the incorporation of the issue as a key task in the new five-year plans of different government bodies and regions, a new guideline will specify general targets, key tasks and measures.

While accelerating the construction of a protected area system supported mainly by national parks, the country will also improve the supervision of such areas and red lines, he said.

He said China will also increase penalties for damaging the ecosystem and monitor the country's biodiversity conservation progress.

China will also engage more proactively in bilateral and multilateral dialogues and cooperations on biodiversity conservation and other green development areas, he said.

Huang said China will strive to fulfill its mandate as the host country for the 15th meeting of the Conference of the Parties to the Convention on Biological Diversity.

Together with the international community, China will strive to seek common ground while shelving and overcoming differences.

"The country will endeavor to make contributions to the joint effort to curb biodiversity loss and promote the harmonious coexistence of man and nature," he said.

The biggest UN biodiversity meeting in a decade, the 15th meeting is tasked with elaborating on the post-2020 global biodiversity framework and identifying protection goals through 2030.

The summit will be held in two phases, from Oct 11 to 15 and in the first half of next year.

Marco Lambertini, director general of WWF International, said he is very excited that China will soon take on the presidency of the Conference of the Parties to the Convention on Biological Diversity.

He said China has demonstrated major progress domestically and a major transformation toward a nature-positive future.

"I think you have all the credentials to be able to lead a global discussion that concludes next year in Kunming with a strong global biodiversity framework," he said.