Writing-brush granny and her century-old workshop in Kunming

In an alley in front of the Daguan Primary School in Kunming, Yunnan Province, lies quietly the Zhang Xuecheng brush-pen workshop, and in the ten-square-meter shop the craft of making traditional Chinese writing brushes is still alive. Gui Huanlan, an 88-year-old granny owns the workshop, which is now jointly run by her sons in their 60s. "To tell the truth, if it is not for my mother’s persistence, I won't do this any longer. Making the Chinese writing brush is laborious and time-consuming,” said Zhang Chongshan, the third son of Gui Huanlan.

The third son is responsible for hair-clearing, and it took him a whole afternoon to clear the hair on 40 common writing brushes. Before him, the work of gluing the hair to the bamboo pipe is done by the second son Zhang Yaoren. 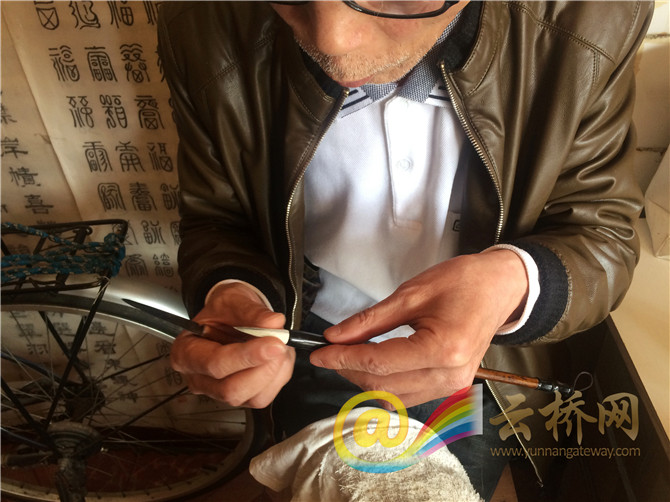 “You can’t directly push the hair into the bamboo pipe. Rather, one should insert it in a gentle and subtle manner. And all the minor adjustments in hair positioning should be finished before the glue dries up and goes hard.” Zhang Yaoren finishes hair-gluing by the standard of a sample brush pen, which is left by his late father Zhang Xuecheng. The sample is marked in a red ribbon

And hair-clearing is followed by the Chinese-character carving on the pipe, the final step in the writing-brush making. The carving is usually done by the eldest son Zhang Ying, aged nearly 70. “I’ve been doing this since 1983, and the Chinese characters are carved in the style of cursive handwriting.” The second son said he used to take interest in learning his senior brother’s craft but he didn’t make it.

In their workshop, there are over 100 brush varieties sorted in 50 ceramic pen holders in rows. To have the diversity, the family would travel in autumn to northeast China’s Liaoning Province to purchase the weasel hair, and to east China’s provinces of Anhui and Jiangxi for the fine wool and the right bamboo. Every raw material is meticulously chosen.

The brush workshop was founded in Jiangxi Province during the Guangxu reign (1875—1908) in the Qing Dynasty. And in the Republic of China period, Gui Huanlan and her husband moved westward to Yunnan, and the brush-pen shop remained in Kunming ever since. The shop is probably the oldest of its kind in the town.