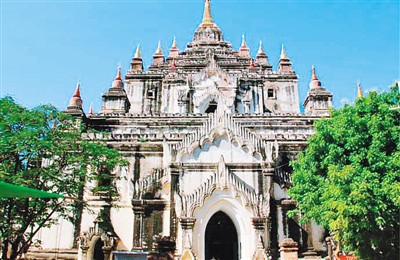 Thatbyinnyu Pahto before the quake. (Photo via Shaanxi Institute for the Preservation of Cultural Heritage)

More than 400 temples in Bagan, an ancient city located in the Mandalay Region of Myanmar, were damaged in an earthquake on Aug. 24, 2016.
On Sept. 22, 2018, China signed agreements to assist Myanmar in the restoration of Thatbyinnyu Pahto, a 60-meter-high temple in the earthquake-stricken region.

The restoration work was mainly assigned to experts from Shaanxi Institute for the Preservation of Cultural Heritage and other heritage conservation institutes and organizations in northwest China's Shaanxi province.

The Shaanxi experts have a lot of experience in restoring stone-structured buildings like Thatbyinnyu temple, said Zhao Qiang, director of Shaanxi Institute for the Preservation of Cultural Heritage.

The Shaanxi heritage conservation team arrived in Bagan shortly after the earthquake to do preliminary assessments and restoration work. They applied unmanned aerial vehicles and conducted 3D scanning to make a detailed survey and map of the temple.

Zhao recalled gray paints and patterns became exposed under the lime layers after investigation, indicating that murals may exist there. The staff members used specialized equipment to collect data about the paint composition, style and the density of the walls.

It is necessary to collect detailed information of any damage, as omitting any single piece of data would affect the restoration project, Zhao said. Thatbyinnyu Pahto reinforced. (Photo via Shaanxi Institute for the Preservation of Cultural Heritage)

He explained that the restoration project may last nine years due to the complicated work.

Zhao said they encountered many difficulties during the on-site construction. Since the experts couldn't wear shoes in the temple according to religious customs, many got blisters on the soles of their feet because the temperature of the steps sometimes hit 63 degrees Celsius.

However, their efforts paid off. From April 22 to June 12 this year, Zhao's team reinforced the Thatbyinnyu Pahto and completed the rescue work of the building to prevent further damage in the rainy season. Zhao said that the local cultural relics department and the public recognized their work.

With a unique architecture style and Buddhist culture, the Bagan towers were named a World Heritage Site on July 6, 2019.

(Photo via Shaanxi Institute for the Preservation of Cultural Heritage)