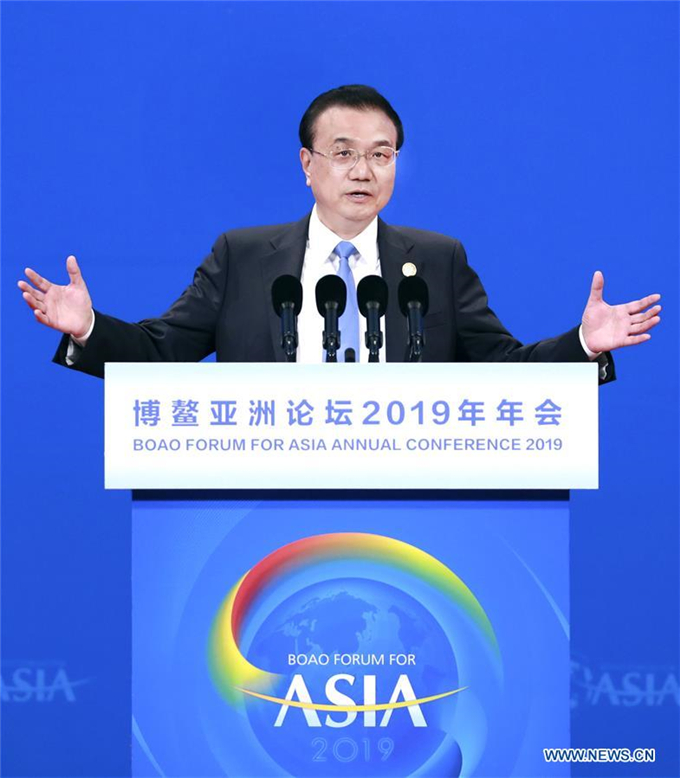 At a time when trade protectionism rises and pressure on the global economy mounts, the world is in dire need to find a way to achieve sustainable development.

At the ongoing Boao Forum for Asia (BFA) annual conference, China has voiced its answer loud and clear.

"The world should work together to seize opportunities, embrace challenges, seek win-win results in cooperation and inject confidence to the world economy with an open mind, inclusiveness and coordinated action," Chinese Premier Li Keqiang said Thursday at the opening plenary of the BFA in China's southern island province of Hainan.

By further opening its economy, promoting multilateral initiatives and advancing structural reforms, China is offering its solution to increase certainties for the world.

Attendees of the BFA know one thing for sure: China will open its economy wider to the world.

On Thursday, Li announced a new set of measures to further open up the economy, offering reassurance to global investors trying to tap into the country's gigantic market.

China will further relax controls on market access and shorten the negative list for foreign investment this year, he said.

The country has also started to formulate matching regulations and rules to support the implementation of the newly-adopted foreign investment law, Li said.

"It is a very encouraging sign for investors in general. For us, it's an additional confirmation that we can continue with our plans," said Robert Aspell, president of Asia Pacific for Cargill, a U.S.-based agriculture and food company.

Following the company's additional investments last year in northeast China's Jilin Province, the company is looking at more investment opportunities in the value-added oil field, as more Chinese are living healthier lifestyles and crave different kinds of oil, Aspell told Xinhua on the sidelines of the BFA.

"We are in China for the long term," he said.

Economists and entrepreneurs at the BFA agreed that openness and cooperation are the keys to address the so-called "black swan" events, or incidents that are rare but could cause catastrophic ramifications.

"There's an old Chinese saying that we should cope with shifting events by sticking to a fundamental principle," said Zhang Yuyan, an economist with the Chinese Academy of Social Sciences.

"The fundamental principle here is that the world should always work together to counter the uncertainties," Zhang said.

During a heated discussion at the BFA titled "Global Economic Outlook 2019: Certainties and Uncertainties," panelists saw the Belt and Road Initiative (BRI) proposed by China as an effective way to deal with the uncertainties that the world faces.

Michele Geraci, undersecretary of state of the Italian Ministry of Economic Development, said the signing of a memorandum of understanding (MoU) with China on the BRI will bring win-win results in areas including infrastructure, especially for water transport projects.

Geraci said that he expects other countries to follow Italy to join the initiative and sign the MoU.

"We will do more business with China and lead other European countries to see the benefits," Geraci said.

Initiatives such as the Belt and Road not only bring Chinese firms more opportunities to expand overseas but add to the chance for the global community to achieve common prosperity, participants at the BFA said.

China and other countries should push forward regional integration, build a more dynamic Asian market and better align the BRI with development strategies of all countries, Premier Li said at the opening plenary.

Hiria Ottino, president of the Pacific-China Friendship Association, said the BRI has offered a new perspective on how the international community could work together.

"In the past, we didn't want to share our knowledge or experiences because we feared losing out. Now we are looking at each other not as competitors but as partners. This is the most important thing about the BRI," he said.

At the international conference center of the BFA, two photos showing the sharp contrast of farming in central China's Henan Province have drawn the attention of the participants.

In one picture, farmers were plowing a field with two cattle in 1957. In another photo taken last year, several harvesting machines were reaping wheat in a similar field.

Technological innovation in the past decades has fostered world economic growth, and it will continue to be the key driving force for global prosperity, analysts said.

China has been intensifying its efforts to restructure the economy, with incentives introduced to encourage entrepreneurship and innovation.

On Thursday, Premier Li urged all countries to strengthen cooperation in innovation and create an open, fair, transparent and predictable business environment, which will facilitate the sharing of innovation resources and achievements.

For Aspell, China's commitment to better protect intellectual property helps companies like Cargill tap into the innovation that is thriving in the country.

"There are a lot of young people in China sitting in their apartments coming up with very interesting things," Aspell said, adding that the company is particularly interested in digitalization.

In a world that abounds with uncertainties, fostering innovation is one certain thing that countries should resort to for achieving sustainable growth, said Zhang Tao, deputy managing director of the International Monetary Fund (IMF).

"Innovation can provide a variety of new technologies which provide opportunities for higher productivity," he said.

Hans-Paul Burkner, chairman of the Boston Consulting Group, believed there are more certainties than uncertainties in the future.

"The key is to see that the future is in our hands. It does not just happen. We make it happen," he said.