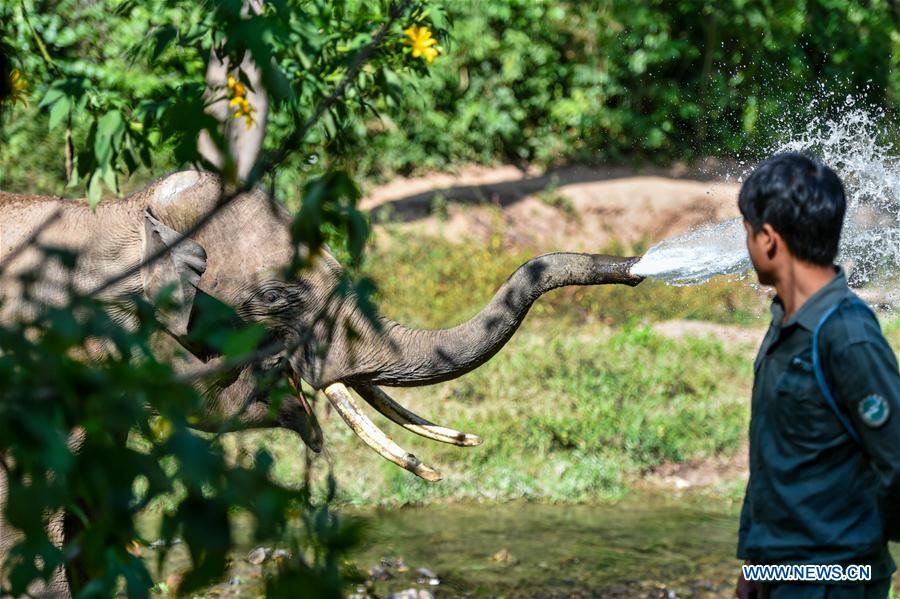 An Asian elephant sprinkles water with its trunk in a jungle near the Asian Elephant Breeding and Rescue Center in Xishuangbanna National Nature Reserve, southwest China's Yunnan Province, Nov. 13, 2019. The Xishuangbanna National Nature Reserve in southwest China has been known for the vibrant biodiversity in its 240,000 hectares of tropical jungles. While the jungles provide rich sources of food and water, they also pose life threats to their inhabitants. The local Asian elephants, for instance, might fail to survive in the wilderness in cases of severe injury or illness if no one came to their rescue in time. The Asian elephants, which are under first-class national protection in China, are mainly found in Yunnan. Wildlife conservation workers have dedicated themselves to improving the welfare of the species. In November 2008, they established the Asian Elephant Breeding and Rescue Center. The facility now functions as a de facto sanctuary for stranded wild Asian elephants across the region. With the help of a professional elephant caregiver team, Asian elephants rescued by the Center have recovered from their own trauma. Every day, the caregivers stay with the elephants for more than ten hours, monitoring their health, bringing them to the jungles so that they can re-familiarize with the wild. Over time, a "jungle friendship" grew between the elephants and their human companions. What the elephant caregivers are doing is a microcosm of the China's environmental commitment. Under the country's increasing conservation efforts, the wild Asian elephant population in Yunnan has risen from about 150 to nearly 300 in less than 30 years. (Xinhua/Li Mangmang)