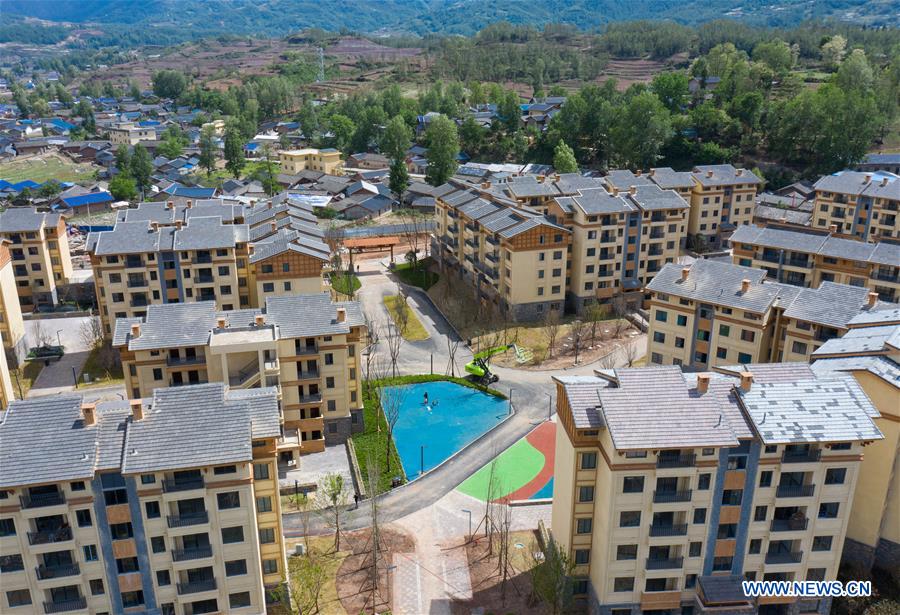 CHENGDU, May 14 (Xinhua) -- Early in the morning, when the first rays of sunshine peeked through the door cracks into his dim room, Mou'se Dati got up, swept the ashes in the cooking fireplace, stepped out of the yard and locked the gate.

Taking a final glance at the century-old house where he was born and grew up, Mou'se, along with his wife, headed to their new home 65 km away down the cliff.

Mou'se, 51, is from the village of Atulieer atop a cliff in Liangshan Yi Autonomous Prefecture, southwest China's Sichuan Province. His family is among the 84 registered poor households of the village that were relocated to the county seat of Zhaojue.

Some 18,000 impoverished residents from 92 villages moved to their new homes at a newly-built community at the county seat this week, the largest poverty alleviation relocation project in Sichuan.

As part of the government efforts to eliminate absolute poverty by 2020, China plans to relocate nearly 10 million poor residents from remote barren and disaster-prone areas to more habitable places between 2016 and 2020.

With fertile land and abundant sunshine, the clifftop village at an altitude of 1,700 meters had a ladder made of vine and wood as the only access to the outside world. The villagers' ancestors inhabited there as early as the Yuan Dynasty (1271-1368), finding it an ideal farming place while avoiding violence during times of war.

As time went by, farmers found the isolated geographical location that used to protect them from war began to hinder their development.

"It took me half a day to climb down the cliff to buy a packet of salt," Mou'se said, adding that he had to sell the corn he grew at a lower price because he was reluctant to carry it back all the way up the clifftop home.

Four years ago, photos capturing a dozen students in line climbing down the ladder to school were published online, arousing public attention.

The local government then spent 1 million yuan (about 141,000 U.S. dollars) building a 2.8-km ladder with over 6,000 steel bars. Drones were used for mail delivery, and 5G network has covered the village.

Tourists are attracted there as well. Last year, 100,000 tourists visited the village, bringing nearly 1 million yuan of income to villagers, who run grocery stores, accommodate tourists and sell local produce such as honey and oranges.

In the recent anti-poverty evaluation, the 84 registered impoverished households reached an average per capita income of 6,000 yuan last year, which means they will no longer be listed as poor.

Despite their higher income, villagers have found relocation the only solution to the transportation problem.

Funded by the government, Mou'se spent only 10,000 yuan on his three-bedroom apartment, with much of the furniture provided. His daughter will have her own bedroom.

The daughter, 17, now boards at a local high school. As there were no education facilities atop the cliff, the girl did not start school until age 11, when the family believed she was tall and strong enough to climb down the ladder every day to school.

In the new house, his daughter can go to school much more easily and safely, and it will also be more convenient for him to visit the hospital to treat his frequent headaches.

Their residential community has been equipped with a school, a supermarket, a small square and a basketball court. Industries such as farm produce processing will be developed to help the relocated residents find employment.

Over the past four years, China has relocated 9.3 million poor rural residents to more inhabitable areas, 9.2 million of whom were later lifted out of poverty, the National Development and Reform Commission, the country's top economic planning body, said in March.

Wu Junqian, an associate professor of economic research from the Southwestern University of Finance and Economics, said the relocation policy will help the less developed areas to bridge the gap with wealthier areas so that villagers can better enjoy the benefits brought by economic development.

Meanwhile, the relocated villagers need to make efforts to adapt to the new environment and get used to their new jobs and lifestyles, Wu said.

In the old clifftop house, the family photos of Mou'se and the certificates of merit of his daughter still hang on the wall. The house will be preserved and reinforced as a tourism facility.

"My wife and I plan to run a family inn business in the old house, and we will come back from time to time," he said.

According to official plans, more villagers from Atulieer will move down the cliff, embracing a new life. Enditem