Xu Yunfeng, a keeper of Longlong, an elephant calf that injured its left front leg in July, checks the leg's recovery on March 15 at the Asian Elephant Breeding and Rescue Center in the Xishuangbanna Dai autonomous prefecture, Yunnan province. [Photo by Chen Xinbo/Xinhua]

A wild elephant calf, found with a wounded leg and left behind by a migrating herd in Yunnan province's Xishuangbanna Dai autonomous prefecture, has recovered thanks to the care given to it by Asian Elephant Breeding and Rescue Center workers in the prefecture.

In July last year, the calf, later named Longlong－meaning "dragon" in Chinese－was found by rescuers roaming around Manfeilong village in Pu'er city with injuries to its left front leg. A team of more than 100 workers from several local government departments was immediately dispatched to assist the calf.

The team located the calf's family about 5 kilometers away, but the animal's injuries meant it could not join the herd. The rescuers caught the calf, treated its wounds with anti-inflammatory medication and transported it to the rescue center.

Several days after the calf arrived at the center, it became accustomed to its new environment and began to eat grass and drink goat milk. Thanks to the careful treatment of rescuers, the calf gradually recovered from its injuries, and received routine daily checkups. It also took part in specially-designed rehabilitation and wild trainings with the help of keepers designated by the center.

The center, which is the only research institute in China that focuses on Asian elephant rescue and breeding, has assisted more than 20 injured elephants since it was established in 2008.

The Asian elephant is listed as endangered on the International Union for Conservation of Nature's Red List of Threatened Species and is under the highest level of State protection in China.

In recent decades, the species has faced a number of threats, including a surge in the human population, a reduction in forested areas and increased poaching.

However, after determined protection efforts made by local authorities and villagers, the population of wild Asian elephants in Yunnan has risen from about 180 in the 1980s to around 300 today. 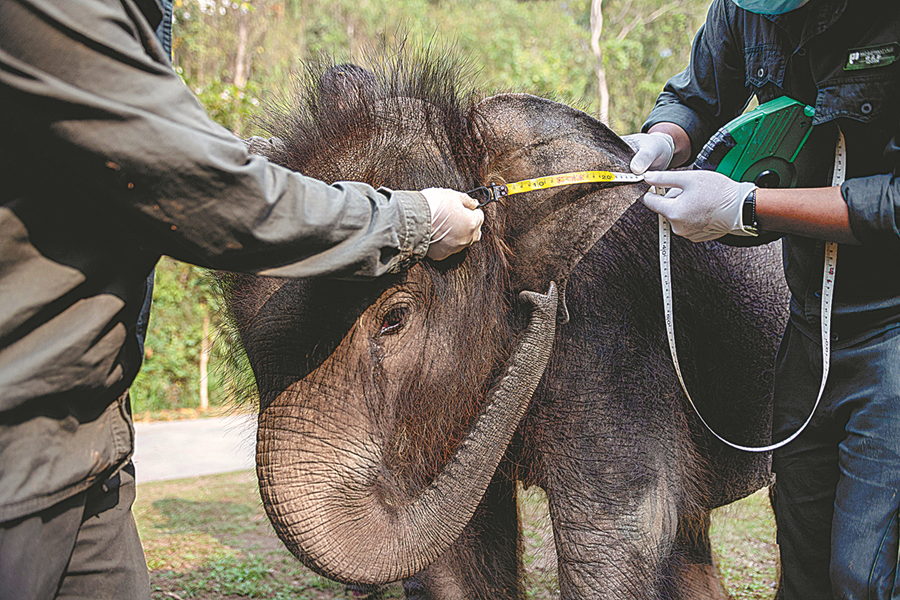 Workers at the center measure Longlong's ear during a physical checkup. [Photo by Chen Xinbo/Xinhua] Xu comforts Longlong as two other keepers measure the length of the calf's tail in March. [Photo by Chen Xinbo/Xinhua] 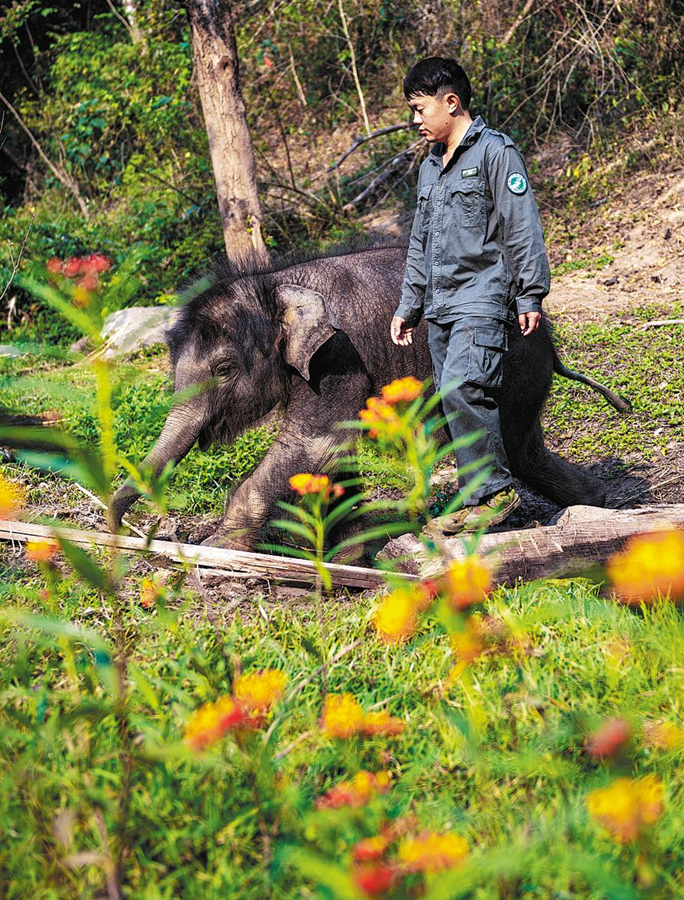 Longlong, accompanied by Xu, returns to the center after a wild training session. [Photo by Chen Xinbo/Xinhua]

Rescuers hold the calf gently with ropes before treating its leg wounds with anti-inflammatory medication in March. [Photo/Xinhua]