How do expats in Yunnan spend Spring Festival?

Indian doctors: The festival is enjoyable in Kunming

“I enjoyed using the Chinese yuan, met many friends, and ate many Chinese foods. I enjoyed it all in China (in the holiday),” said Pushpa Majestry, an Indian doctor at the Second Affiliated Hospital of Kunming Medical University.

Pushpa, who studied medicine in the Kunming university, was speaking about her Spring Festival holiday experience during an interview with Yunnan Gateway on February 21. Also at the interview was her workmate Shrawan Kumar, also an Indian.

During the week-long holiday, Pushpa visited the Green Lake and strolled along the Daguan River, watching the black-headed seagulls in Kunming. Together with her Chinese friends and many other international friends, Pushpa had a big dinner at a restaurant on Nanping Street, downtown Kunming.

“I went to the Dianchi Lake (for sightseeing) and I played volleyball and basketball with my Chinese friends.” Shrawan, who is a sports lover, also shared his Spring Festival leisure during the interview.

Shrawan said he has been in Kunming for six years, adding he plans to work in the city for one more year before returning to India.

Wyatt Gordon, an handsome American young man, has worked in Kunming as a teacher in recent years. Shortly after his home trip to Oregon and New York for Thanksgiving and Christmas, Gordon took his girl friend Millie back to Yunnan in January. Millie comes from England. 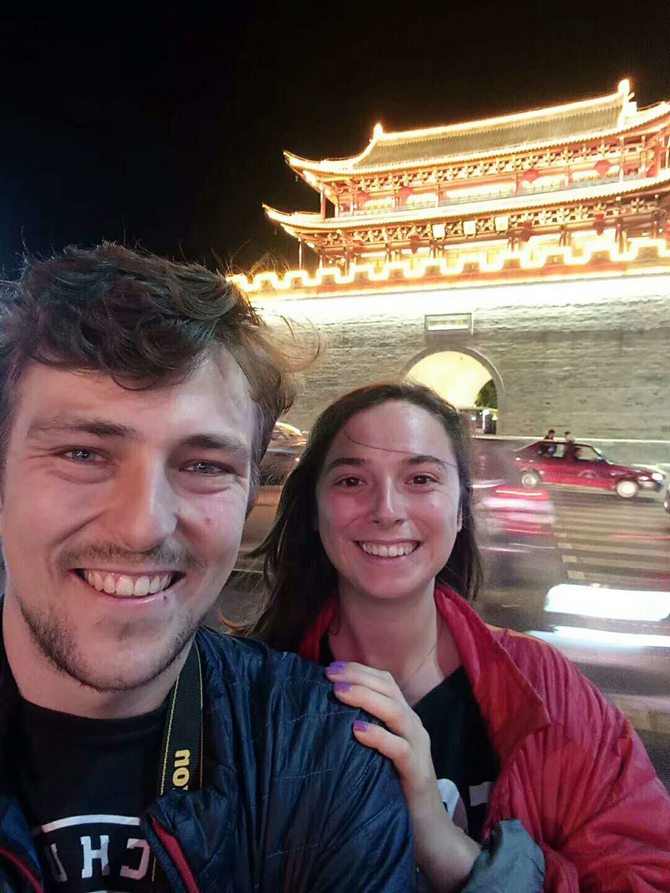 In the past week-long Spring Festival vacation, Gordon and Millie first had a staycation in Kunming and then toured to Jianshui County. In Jianshui, famed tourist attractions involve the Swallow Cave, the Confucius Temple and the Zhu's Family Garden. Jianshui falls under the jurisdiction of the Honghe Hani and Yi Autonomous Prefecture in south Yunnan.

“My girlfriend Millie and I are visiting Jianshui after we spent the holiday in Kunming.” Gordon said during an online interview on February 21. The couple also had sightseeing at the Confucius Temple and the Zhu's Family Garden, while experiencing traditional Chinese culture.

The English and American lovers were impressed by the sculptures and paintings in the temple, as well as the landscapes and traditional Chinese architectures in the garden. They had a happy and meaningful holiday in Yunnan.