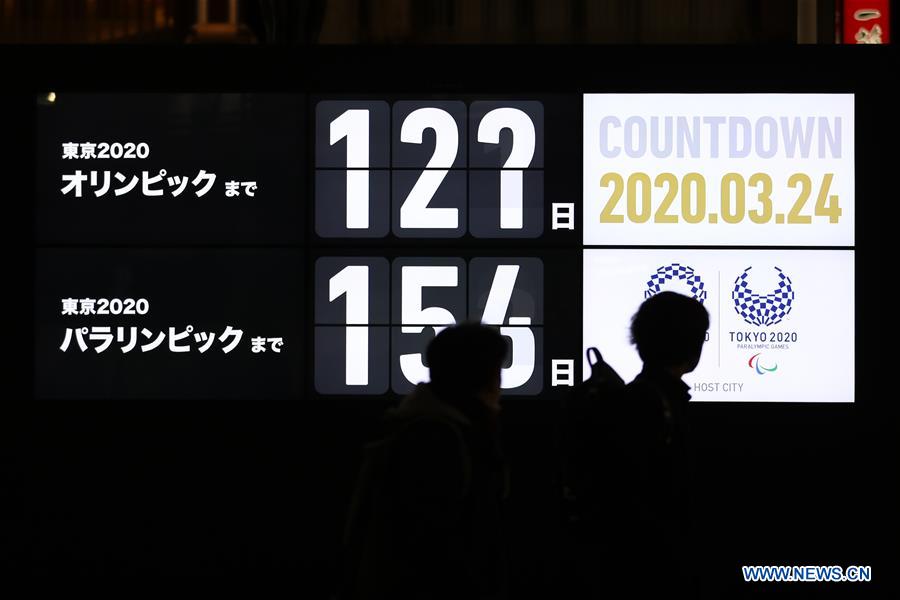 A pedestrian walks near a Tokyo 2020 Olympic Games countdown display in Shimbashi district of Tokyo, Japan, March 24, 2020. Japanese Prime Minister Shinzo Abe announced on Tuesday that Japan and the International Olympic Committee (IOC) have agreed to postpone the Tokyo Olympic and Paralympic Games by one year. (Xinhua/Du Xiaoyi)

Japanese Prime Minister Shinzo Abe announced here on Tuesday that Japan and the International Olympic Committee (IOC) have agreed to postpone the Tokyo Olympic and Paralympic Games by one year.

Abe made the announcement after a teleconference with IOC chief Thomas Bach, putting an end to two months speculation of the future of the Games since the outbreak of coronavirus in late January.

"I proposed to Mr Bach that we postpone the Games for a year. He 100 percent agrees with me," Abe said in a statement.

"This will make it possible for athletes to play in the best condition, and will make the event a safe and secure one for spectators," Abe added.

In the IOC's side, Bach was joined by John Coates, the Chair of the IOC Coordination Commission, IOC Director General Christophe De Kepper and the IOC Olympic Games Executive Director Christophe Dubi.

The IOC said later in a statement that the meeting was "very friendly and constructive" and the two leaders expressed their shared concern about the worldwide COVID-19 pandemic.

The IOC statement reads: "The Tokyo Olympics must be rescheduled to a date beyond 2020 but not later than summer 2021."

The two sides agreed that "the Olympic flame will stay in Japan. It was also agreed that the Games will keep the name Olympic and Paralympic Games Tokyo 2020."

Mori, also a former Japanese Prime Minister, told a news conference later that the Tokyo Olympic torch relay, scheduled to begin in Fukushima on March 26, will no longer begin as originally planned.

"We will not start the torch relay," he said. "In response to the postponement of the Olympics, we will draw a new plan for the relay."

The postponement of the Games was a "sigh of relief" for Governor Koike, who has stressed numerous times that the Games would be held as planned.
"Now, Tokyo's primary goal is to overcome the coronavirus," she said.