The East Village in Lower Manhattan, New York City, has long been a foodie’s paradise where French, Italian, Japanese, Moroccan and Greek cuisines can all be found without difficulties.

Among numerous restaurants, there is a small place with four letters being written on its light-green awning outside: D-I-A-N.

This place is named Dian Kitchen, which specializes in the regional Chinese food from southwest China’s Yunnan province. And it has already become one center for people who love Yunnan food in New York.

Jessie Zhang, the restauranteur, comes from Yunnan while his husband is a local New Yorker who was fascinated by the culinary culture there, particularly rice noodles, in his trips to Yunnan.

Jessie went to New York for her MBA study in 2012. As she couldn’t stopping missing the food of Yunnan, Jessie’s families soon suggested her to open a small restaurant, providing authentic Yunnan snacks.

She, therefore, started to make plans with her husband in early 2017. Over a year later in May 2018, Dian Kitchen was opened. As a space with around 40 square meters, it can serve up to 17 or 18 customers at once.

“Considering our limited space, we don’t sell cross-bridge rice noodles, which is probably the most famous snack of Yunnan, at the moment,”  explains Jessie.

According to her, even the rice noodles she uses at Dian Kitchen are produced domestically in the United States, they very much resemble what people eat back in Yunnan.

Jessie insists to prepare chicken, beef and lamb broths herself for the rice noodles every day. “After times of experiments, our food all taste very similar to the authentic ones,” she says confidently. “And I’m still working on these snacks to make them taste even better.”

“Where is Yunnan?” This is perhaps the most asked question that Jessie has to respond to on a daily basis. With a map of China hanging inside the restaurant, she tells her customers over and over that Yunnan, geographically speaking, is not far away from Vietnam, so that similar food habits have been shared. Rice noodles and pho — both made from rice — are best examples.

Yunnan food is not as well-known as its Peking, Sichuan and Cantonese counterparts overseas, but Jessie has been keen on cooking and popularizing authentic Yunnan dishes. “As a Yunnan girl, I hope to bring the food of my province to more U.S. diners, and in the same time satisfy the cravings of my Yunnan friends here in New York,” she says, smiling.

To Jessie, authenticity is not the same thing as sticking to traditions. In fact, numerous changes can be identified in the restaurant.

First on all, more appealing visual presentations of food have been seen. And the interior space is one which combines both modern and traditional Chinese elements. Moreover, the menus are, unsurprisingly, all and only written in English. 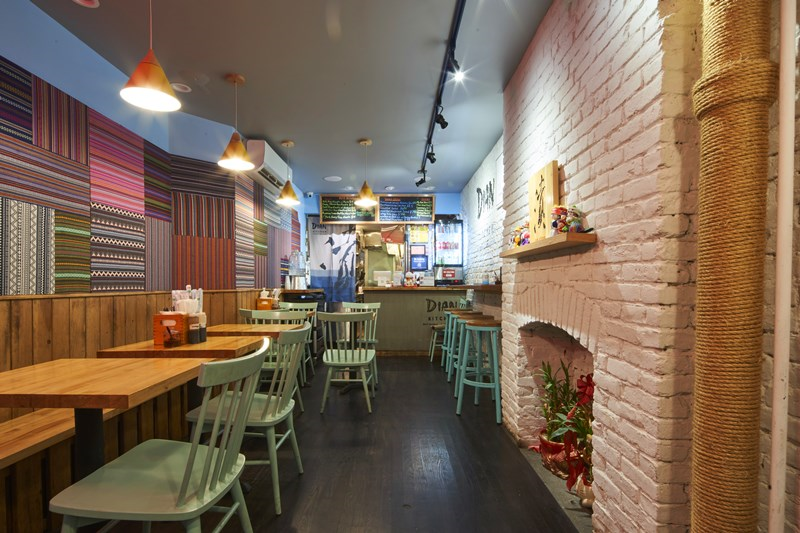 “What I want to create is a cozy and relaxing atmosphere which makes customers feel free to come and stay,”she emphasizes.

“Generally speaking, our restaurant is equally attractive to Chinese and local American customers,” Jessie tells us. “Many of them even write down their reviews or comments on Yelp afterwards, which makes me really happy.”

“I believe gold will shine everywhere, and people who love and appreciate Yunnan food will all come to my place one day.”

As regards to the future, Jessie says she has been looking for opportunities to extend the business and make food being provided more standardized.

Meanwhile, she also manages to further market the restaurant, making more New Yorkers fall in love with the food culture of Yunnan.

Writing and trans-editing by Wang Jingzhong; photographs providing by the interviewee