Jizhaoan, most beautiful nunnery in Dali

Entrance of the Jizhaoan nunnery (Online photo subject to deletion)

Editor's note: Lost in the mountains, designer Gao Ludong came across Maiohui, abbess of the Jizhaoan nunnery, and they got to know each other. Later, Gao volunteered to renovate the nunnery. Thanks to the joint effort by the designer, the abbess and other voluntary workers, Jizhaoan was turned into a most beautiful and artistic nunnery in west Yunnan’ Dali prefecture, assuming a brand new look. Now the nunnery in Mt. Cangshan that overlooks Lake Erhai has grown to be a celebrated destination among tourists in Dali.

Dali has a most beautiful nunnery

In the Chinese context, a nunnery mostly means a place where Buddhist nuns live and practice their religious beliefs. Here is how to get to the Jizhaoan nunnery: Set out from the Gantong temple five kilometers off Dali Ancient City, and one needs to first walk up along a blue flagstone path that is coupled with murmuring streams, towering trees and fragrant vegetations. Then, several holy towers will gradually come into sight amid the lush tree shades. Ascend step by step, and one will reach Jizhaoan, Dali’s most beautiful nunnery.

Architect and designer Gao Ludong once got lost in Dali’s Canshan mountains and had a short break at the Jizhaoan nunnery. Upon his leaving, Gao told the abbess Miaohui his phone number, saying he’s good at architectural design and willing to help when needed.

Months later, the nunnery was swept by piercing winter gale, and Miaohui planned to rebuild the shaky roof. The abbess called Gao, who then volunteered to renovate the Jizhaoan nunnery.

Gao Ludong was born in a soldier's family in the 1960s. At the age of 19, he was admitted into China national kayaking team with an excellent performance, becoming one of the pioneering Chinese kayakers. Representing China, Gao, aged 24, was present at the 1984 Los Angeles Olympics, and the rich experience in sports allowed Gao to be kayak coach of Team China.

At the age of 33, however, Gao, who was at the height of his sporting career, made a decision that would change the second half of his life. He quitted the stable job as coach to be an architectural designer.

Over the years, he intermittently visited diverse places in China, each inspiring him in a new way. In 2011, Gao came to Dali and rented a cowshed near the Erhai lake. There, he mapped out a court design that had been on his mind. Using local bricks, tiles, trees and grass, Gao gradually materialized his design of an ideal court, finishing his first work as an architectural designer.

Perhaps designed by destiny also, he later unexpectedly entered the Jizhaoan nunnery when lost in Mt. Cangshan. Having a long and agreeable talk with the abbess Maiohui, Gao promised to help renovate the nunnery at his departure. 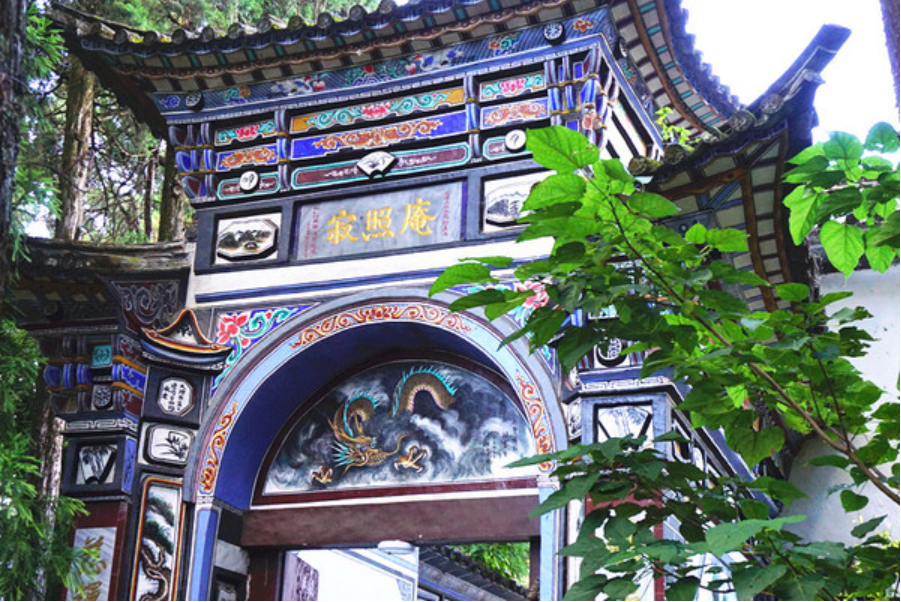 Renovated gate of the nunnery (Online photo subject to deletion)

The renovated Jizhaoan marked Gao’s second work as an architect, and he devoted much effort to the renovation.

If the clouds shrouding Mt. Cangshang can be compared to a woman in love, who intertwines with the ridges in differed pastures; then the Jizhaoan nunnery resembles a reserved hermit, who hides himself deep in the mountains and leads a life of leisure.

To reach Jizhaoan, one can also choose to set out from the Guanyin (avalokitesvara) hall in stead of the Gaotong temple, but a two-kilometer winding trail needs to be trek through.

Built in the early years of the Ming Dynasty (1368-1644), the Jizhaoan nunnery acquired its name from the Book of Changes, meaning meditation in solitude. “The Buddha lacks in nothing. It doesn’t matter if you fail to offer some incense, but you need to have faith.” Miaohui said the visitors to Jizhaoan are not encouraged to burn incense sticks, but the nunnery has a front room for visitors in need of doing so. Therefore, no smoke was seen in Jizhaoan’s surroundings, and only the shady bushes and winding traces were in sight. The nunnery is cool and graceful on the whole.

To be fit for the Jizhaoan’s cool and quiet surroundings, Gao tried his best in the renovation design. And by joining hands with the abbess Miaohui and other workers, he managed to grant the once shabby nunnery a brand new look with hard work.

The renovation design by Gao Ludong is really ingenious. At the Jizhaoan entrance, lush trees and a winding path were designed to lead one to the quiet and secluded nunnery. Entering the courtyard, visitors were greeted by flowers in blossom, wind whistling in the pines, and an air of leisure under the tree shades.

Maiohui was in charge of interior designs, rendering more femininity into the nunnery. The decorations, items, foods and scriptures all look gentle and graceful. The abbess collected bottles, jars and logs and match them with plants, forming two rows of potted orchids that are quiet and refreshing. In addition, a nursery garden was set on the hill behind the courtyard, where succulent plants fitting for Dali’s climate are planted.

Maiohui laughed at the idea that she and Gao Ludong are a perfect match. They like each others’ works a lot. Thanks to their joint effort, Jizhaoan presents a brand new look, and visitors see it as a most artistic nunnery in Dali.

Now, Jizhaoan is frequented by crowds of visitors, who are queuing up and waiting long just for a taste of vegetarian dishes at the nunnery. Some prefer to enjoy their food at the outdoor stone tables surrounded by tree shades, while others idle the time at the tea room, holding a tea cup and admiring the hillside succulents through the windows.